How can beam divergence be corrected for in a $\rm CO_2$ laser cutter?

I have a 90W RECI CO2 laser tube that I recently measured the beam divergence on. This was done by pointing the laser at a fire brick and melting it for a few seconds at different distances. Multiple samples were taken and the glassed area was measured with calipers and averaged. (please advise if you know of a better method)

I am planning to build a CNC gantry system with mirrors and a stationary laser. It will require 17ft maximum beam distance and 2ft minimum beam distance. The layout is similar to this image; where the laser does not go through any optics until right before the cut. My focusing lens has a 127mm EFL and its distance from the cut will remain constant. The beam size will not exceed the mirror or optics diameter, but I believe the changing angle of divergence will change my focal point at different locations on the XY bed.

How can this be corrected for or minimized? I noticed that most CO2 cutter bed sizes are small; is that the only way to minimize this issue?

I am attempting to understand the equations on page 5 (Propagation Characteristics of Laser Beams) of Laser Principle Basics.

The following figure is from the link above. 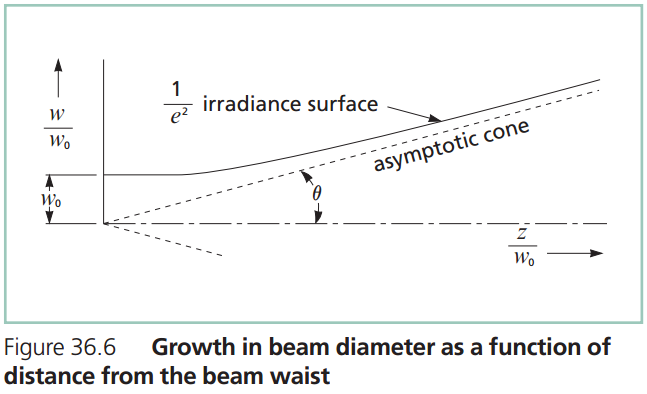 I have added some lenses, angle variables, and focus length variables. 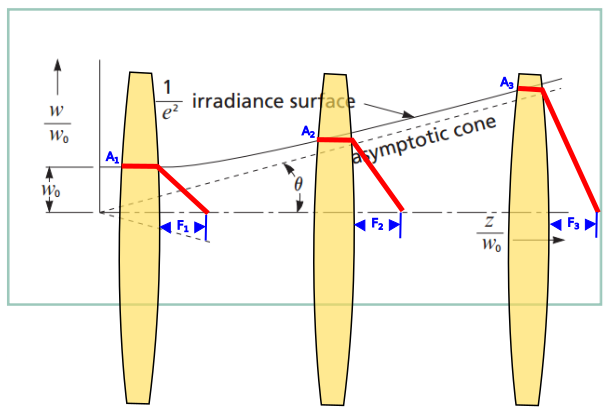 Is this correct? Or are there other distance related issues I am not considering?

Also, do different qualities of CO2 laser tubes have different rates of divergence or am I up against pure physics here?

First, some questions about your setup:

Second, here's an experiment you can try to see if the beam divergence actually is a problem. Repeat your spot size measurements at various distance, but instead of melting a brick directly, put your focusing lens in front of the beam. Then, move the brick back and forth until you find the distance from the lens with the smallest melted spot. Measure the size of this spot and the distance from the lens versus the distance between the laser and the lens. If the variation in spot size and focus distance is too large, read on for a possible solution.

If you want to transport a beam a long distance, the trick is to start with a larger beam diameter. Figure 5.5 in the PDF linked to in @akhmeteli's comment to his answer shows that large beams don't diverge as fast as small beams. The equation for the diameter of a beam as a function of distance from its narrowest point is $$\omega(z) = \omega_0 \sqrt{1+\left(\frac{z\lambda}{\pi \omega_0^2 n}\right)^2}$$ where $z$ is the distance from the narrowest spot (which should be the laser aperture), $\omega_0$ is the diameter of the beam at its narrowest, $n$ is the index of refraction of the material the laser travels through (which is 1 for air), and $\lambda$ is the wavelength of the laser (10.6 microns for a CO$_2$ laser). Far from the laser, the waist is approximately $$\omega(z) \approx \frac{z\lambda}{\pi \omega_0 n}.$$ So, if you double the diameter of the beam ($\omega_0$), your halve the divergence angle (the asymptotic cone in your plot).

The setup I envision is shown in the diagram below: 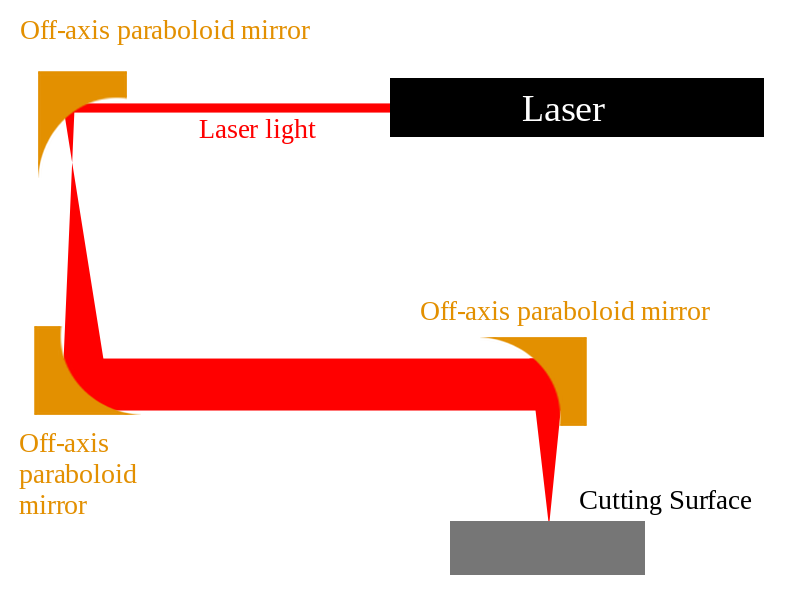 I chose to use off-axis paraboloid mirrors instead of lenses since they have a higher damage threshold than lenses (at least the ones from ThorLabs do). But, you can also substitute lenses and flat mirrors to achieve the same effect. In any case, use two mirrors or two lenses in a confocal arrangement (distance between elements equals the sum of their focal lengths) to substantially increase the diameter of the beam and collimate it so that you can transport it any distance without worrying about divergence. Then, use a third mirror or lens mounted on your motion system to direct and focus the beam on the cutting surface.

Some advantages to this setup:

There are a lot of instruments to measure CO2 laser beam characteristics, for example, our group uses this one, but it is not cheap, and you can only use it in the intermittent mode for 90W.

It does not seem easy to be able to focus the CO2 laser beam at distances from 2 to 17 feet. In principle, you could use a set of ZnSe lenses with different focal length. Our group uses lenses with f=1700mm and f=400mm (appr.) Lenses for CO2 lasers are not cheap either. Maybe there are adjustable lenses, but I don't know much about that.

Divergence typically does not depend on the beam power.

"If beam angle is what is affecting the focus, the difference in beam angle would be greater between zero and the mid point distance of the graph than the midpoint and the end point of the graph. This would mean that a most of the divergence error would occur nearest the laser. Is this true? What am I missing? " I am afraid I don't understand what you are talking about.

The quality of the beam does depend on the laser. What you need is mode quality $M^2$, but it should be decent for an industrial laser. So a decent laser should have a beam close to a Gaussian beam. Typically, the exit mirror of a laser is flat, so the minimum radius of the beam is at the exit of the laser. You can get a much smaller spot using a lens though. However, for a small spot, its depth is also small (the length of a Gaussian beam waist is the length of a region near the focus where the light intensity is at least one half of that in the focus). The beam waist length is proportional to an inverse square of the beam's width in the focus.

I think the best is to solve the problem at its root: your laser is divergent, You are right, your lens will focus at different positions depending on its distance from the laser, and that's quite tricky to correct dynamically on a moving system.

So: collimate the laser imposing the right beam diameter right at its output, before sending it to the head. Build a galilean telescope (also known as beam expander). You need 2 high damage threshold lenses (probably the same type as your last focusing lens) with the right focal lengths. The ratio of their focal lengths will be the magnifying ratio for the beam diameter. Choose them to slightly underfill your subsequent optics. Put them at a distance equal to the sum of their focal length and that's it. Adjusting finely their distance you can correct for the divergence, while having the beam size that you want and constant for all the rest of the path.

I would opt for one negative and one positive lens, so you magnify the beam diameter avoiding a laser focus in air, which with 90W can ionize air or at least create a bad pointing stability. Even if air is not broken at the focus, small air movements can deflect the beam (and temperature raises at the focus, so air moves even more).

And please... don't forget your safety goggles, and think about a protection cage around the setup. 90W do not forgive...

I started this last night. Now there are 3 answers. It sounds like you will get all the information you need. You can also get this and more by calling a company that sells ZnSe lenses, which is what you need. They generally have engineers who will be happy to explain everything you need to know.

Most laser users are not really interested in physics. They just want their laser to work. Here are some general rules of thumb for CO2 lasers.

For the most part, two things prevent a laser from being perfect: diffraction and lens aberrations.

Most CO2 lasers have a Gaussian beam. Diffraction is the cause of beam divergence. It is a fundamental physical process. There is nothing you can do to prevent diffraction. However you can optimize things.

Without diffraction, straight line ray diagrams would show how light works. Given perfect lenses, a cylindrical laser beam would be focused to a perfect point. With diffraction, you get a Gaussian beam. Both the collimated beam and the beam coming to a focus are Gaussian beams.

Gaussian beams to not abruptly end and an edge. They slowly fade away. By convention, the beam radius, $\omega_0$, is the distance from the center where the intensity has dropped by a certain amount. There is light outside this radius.

The diagrams you showed are mostly right, but not drawn well enough to show that rays follow a hyperbola. Far from the laser, they are almost straight. But they are different near the beam waist.

Near the waist, the rays are not straight lines that cross. They curve away from each other. The physics reason is that light is a wave. Under many conditions, the waves move along straight lines. But sometimes they do not.

You can calculate the diameter of the focal spot when you use a lens to focus a Gaussian beam.

$F$ is the distance from the lens to the focal spot. For a collimated beam, it is the focal length of the lens.

$D$ is the beam diameter at the lens

This formula shows that there are a couple simple tricks to get a smaller focal spot. Use a lens with a short F. Or use a beam expander to make D bigger.

A short F has a drawback. It puts the lens close to the spot. Smoke and dirt get on the lens. Dirt absorbs light and gets hot. This shortens the life of the lens.

Dirt is an enemy. Never touch a ZnSe lens. A fingerprint will shorten its life.

A large D has another drawback. Large lenses are expensive.

And last some good news. Unlike optics for visible light, lens aberrations are not a problem at your wavelength.

A diffraction limited lens is a lens where aberrations are so small that performance is limited by diffraction. This is very hard to achieve in a camera lens.

But you only work at one wavelength. You have a very simple optical situation where you want to focus a collimated beam to a point on axis. And most of all, your wavelength is 10.6 um.

10.6 um is 40 times longer than visible light. Diffraction is 40 times worse. Lenses can be 40 times farther from perfect, and the imperfections will still be smaller than those created by diffraction.

Also indices of refraction are much bigger at 10.6 um. This makes it possible to make lenses with relatively gentle curvature. This reduces aberrations further.

The upshot is that a singlet lens can be diffraction limited. Also cheaper plano convex or plano concave lenses may be good enough, even though they are not optimal. That said, they are not cheap.

Talk to an engineer about your needs. He will be the best source of information.

Not the answer you're looking for? Browse other questions tagged optics laser diffraction experimental-technology or ask your own question.

1
Is it possible to focus sunlight from space on a tiny spot on Earth?