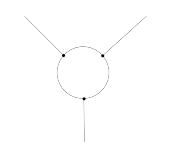 A $\phi^n$ scalar field theory usually refers to a theory which contains in its Lagrangian a term proportional to $\phi^n$. This means that in a Feynman diagram the vertex where $n$ fields/lines meet is allowed. This does not mean that only $n$-point functions are nonzero.

In fact, for the $\phi^3$ example you gave, I can draw the following graph with two lines "entering" the diagram, and where the vertices are "cubic":

which is a contribution to the two-point function (at one-loop order) of $\phi^3$ theory.

Similarly, although one cannot directly join four lines at a point since there is no $\phi^4$ term in the Lagrangian of $\phi^3$ theory, one can find contributions to an effective 4-point vertex, such as: 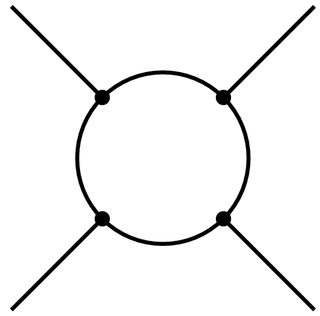 So, while you cannot draw a diagram like this:

You can draw one like this (at higher loop order):

Not the answer you're looking for? Browse other questions tagged field-theory feynman-diagrams correlation-functions or ask your own question.