Why does change in speed of a wave make it refract?

When a light wave enters a medium with a higher refractive index (e.g. from air to standard glass) and its speed decreases, why does that make it refract/bend?

I understand that wavelength decreases and frequency stays the same and therefore its speed decreases, but I can't find anywhere whatsoever why the speed decrease cause the wave to refract. So could someone please explain this?

There are several ways to look at it. From what you have, the easiest is to understand it as deriving from Fermat’s principle:

Because light travels slower in the medium of higer refractive index (as you stated), its course will be so that it travels a smaller distance in this medium than in the other. There's a commonly-used analogy for that (apparently from Feynman): 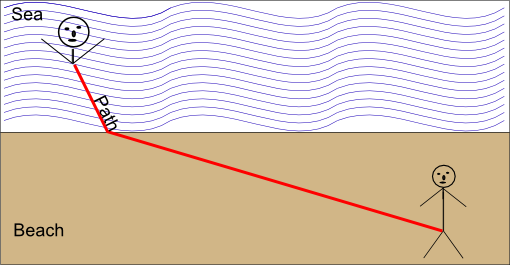 The rescuer wants to reach the drowning person as fast as possible. Because he runs faster than he swims, he won't take a straight path but his optimal path follows Snell's law.

The change in speed is deceleration due to a resistance force like friction.Photon is particle and it experiences resistance in its motion inside medium.If the ray enters vertical to the surface its not deflected and called "normal".Ray is photon's linear orbit.If photon enters at an angle,then resistance force is analysed in two components:one parallel and one vertical to the "normal".The last one pushes it towards the "normal".

Not the answer you're looking for? Browse other questions tagged optics electromagnetic-radiation refraction or ask your own question.

0
Why when light enters to another medium it changes its direction?
2
Snell's Law of Refraction
-1
About change in velocity of a light wave as it enters a different medium

34
Why does wavelength change as light enters a different medium?
0
Why does the ray bend only in one direction?
1
Why a light ray does not refract when it is incident normally to the surface?
0
Photon frequency when transitioning from one medium to another
4
How does epsilon get into the exponent for light?
0
Why does the wavefront remain a line when light enters another medium?