The CMB and the Hubble comoving radius

I have been thinking on this for a while and i don't get it. My point is, the comoving Hubble radius $(aH)^{-1}$ is the distance at wich the universe expansion begins to be superluminical. In an inflation process, the comoving Hubble radius shrinks, so we get infinite conformal time before the CMB is released to have an homogeneous temperature picture of the surface of last scattering. My question is, if the Hubble radius shrinks, and this graph of Daniel Baumann notes on Cambridge's course of Cosmology is correct 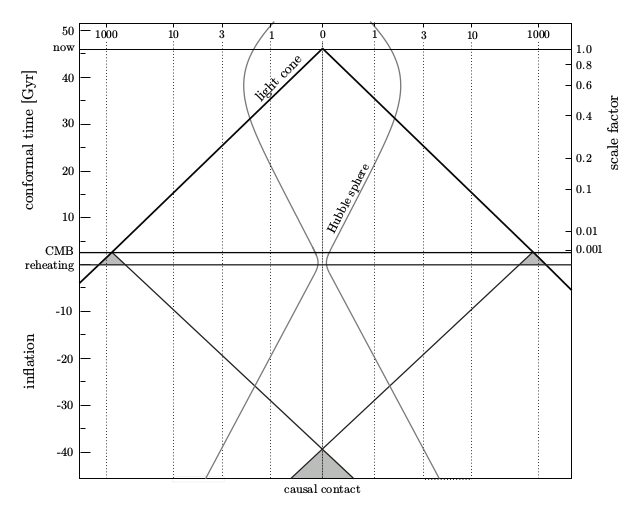 why can we see the 2 points in that graph that correspond to the 2d surface of CMB that we can see today if, according to the graph, they were out of our comoving Hubble radius when they were emitted? Aren't those photons infinitely redshifted in our radial direction? That's my question!

The question is a little unclearly worded, but I understand it as:

Is it true that the Hubble Sphere can be shrinking?
And can we really observe regions in the Universe which were receding superluminally at the time the photons were emitted?

It is important to remember that the x-axis on the diagram in the OP shows co-moving distance, not proper distance. When the expansion of the Universe is decelerating, as you see, the Event Horizon (and the Hubble Sphere) is expanding in comoving coordinates, as well as in proper distance coordinates. This allows for regions - including the photons currently inhabiting them - which were previously outside the Hubble Sphere to get inside it.

On the other hand, once the expansion of the Universe has started to accelerate, the reverse is true: The Hubble Sphere is now shrinking in comoving coordinates, but still expanding in proper distance coordinates. This means, quite intuitively, that in this phase of the Universe's existence, regions that have so far been receding slower than light, start doing so superluminally after a given point in time.

This also means that we can indeed observe photons from regions which are currently, and have always been, receding from us. Photons from these regions emitted in our direction will recede from us initially, but they will still propagate into regions of Space receding slower than before, eventually "catching up" with our motion and since approaching us.

For more on the subject, I warmly recommend the modern-classic paper by Tamera Davis and Charles Lineweaver called Expanding Confusion: Common Misconceptions of Cosmological Horizons and the Superluminal Expansion of the Universe - this answer is basically just a rephrasing of some stuff from that paper.

Not the answer you're looking for? Browse other questions tagged cosmology space-expansion cosmological-inflation cosmic-microwave-background redshift or ask your own question.

10
Will acceleration rate of expansion of space become faster than speed of light?