If space is "expanding" in itself - why then is there redshift?

The usual better explanation is that "space itself is expanding." (Of course, on scales below clusters, gravity pulls "smaller" structures together.)

An even more up-to-date explanation is that the conceptual "metric of space" is "expanding" (here's a typical pedagogic example) which can perhaps be summarized as the "scale is changing".

So ... distant objects are redshifted.

But why? Everything's just expanding -- the very metric of spacetime is expanding.

Indeed, it would seem to me that you would only see redshift (or if you prefer, time dilation of far-away things) strictly in the case of "everyday" motion within the metric of space; the very idea of the actual "metric of space changing!" would seem to be that, those of us internal to that metric of space would have no clue that any such expansion is happening: the scale is just changing for everything.

What's the best way to understand this?

Imagine simply a meter cube in a video game with a few things in it. There is no exterior, it is the universe. I expand the entire thing... 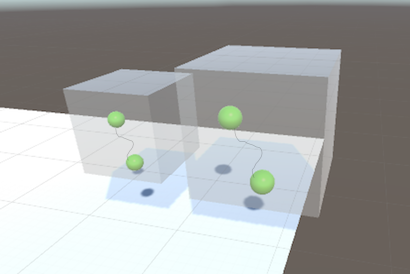 {note...of course, obviously, the 'outside' (shadows etc.) added by the 3D presentation software to clarify the PNG here, have utterly no meaning and do not exist in any way}

... to all the beings inside, I believe absolutely nothing has changed, there'd be no redshift between the objects there.

Note too this somewhat similar (related?) question, which came up with the recent 2016 gravitational wave discovery:

How is it that distortions in space can be measured as distances?

It's pretty easy to explain if we take a classical view of an electromagnetic wave. As an EM wave from a distant star propagates towards us, the space it propagates through is expanding. Since the space is expanding, the peaks & troughs of the EM wave are getting farther apart from each other. That corresponds to an increase in wavelength and a decrease in frequency; a redshift arises.

I think you're imagining "the very metric of space is expanding" to mean that the definition of distance is changing$^{†}$, but that's not the case. The "metric of space expanding" means the distances themselves are changing. As an electron and a proton are subjected to an expansion of the space them, the electrostatic attraction between them (speaking in a roughly non-quantum framework) pulls them "back together" and maintains the size of the atom.

The "rubber sheet" analogy is a little perilous, but in this case I think it's apt. Two objects on an expanding rubber sheet will experience an increase in the distance between them, but not if they're connected by a spring - in that case, they will maintain their relative distance.

It's not a magic exemption that allows the atoms of our measuring apparatus to be unaffected by an expanding universe; they're unaffected because the electrostatic interactions and associated quantum mechanics that determine the behavior of subatomic particles is not changed by the expansion of space.

$^{†}$that would just mean the universe is changing from one set of units to another, which would (as you point out) be physically and philosophically undetectable, and therefore meaningless.

What are the observational/experimental facts:

1)Atoms have definite spectra, with a fixed pattern, a fingerprint of the atom

2) The further away ( measured by luminocity) galaxies all around ours the more shifted the fingerpring pattern towards the red part of the spectrum.

3) This happens uniformly all around.

The model that fits these facts is General Relativity, which predicted the behavior

In the hierarchy of forces , the gravitational force is the weakest. This assures that atoms, matter in general up to the size of galaxies keep their structure, the raisin bread analogy. Gravity is strong enough to keep even clusters of galaxies unaffected and given some assumptions on the energy density and solution of the general relativity equations gravity can fight the expansion and lead to the big crunch,.

Photons are elementary particles that have to obey locally energy and momentum conservation. The expansion of the universe changes their momentum and thus the atomic spectra arrive shifted towards the infrared.

the very idea of the actual "metric of space changing!" would seem to be that, those of us internal to that metric of space would have no clue that any such expansion is happening: the scale is just changing for everything.

It is the fact that matter is bound by forces that are not affected by the expansion that allows us to measure the expansion. Otherwise you are correct, our atoms would also be expanding and we would see no shift in the atomic thumbprints.

FYI Interestingly I found this article,

where the authors address

the exact issue of this question,

and indeed whether the whole pedagogical idea of "space expanding," is crap.

For example, section 2.6.2, is a question identical to the OP here.

An extension of the argument against global expansion given in section 2.2 is that is should be undetectable, since everything will simply expand with it.

They essentially go on to say that because atoms don't expand we can measure redshift, eg,

Which does seem to be the asymptotic answer here.

It's not wrong. There is no difference in general relativity between "expansion of space" and simple relative motion. They are the same phenomenon described with respect to different coordinates.

Here's an analogy. On a planet-sized ball of dirt (the earth without oceans, mountains, etc.), carve a bunch of straight (great-circle) foot paths from one pole to the other, all of a fixed width (say 1 meter). As you go away from the poles, the foot paths get farther away from each other, reaching a maximum distance at the equator, then reconverge to the other pole.

Now consider this situation from the perspective of polar coordinates (latitude and longitude). Each path is at a constant longitude. As the latitude changes, the paths don't move apart or together; they remain at fixed longitudinal separations, while the scale factor relating the longitude to physical distances changes.

Is the separation of paths now unobservable, because the metric itself is being rescaled? No. You don't change physical reality by choosing new coordinates for it. In polar coordinates, the coordinate width of the path decreases as the scale factor increases, meaning that the physical distance between the paths, measured using the physical path width as a meterstick, increases just as before. The decrease in coordinate width is not the result of a physical force acting against the expansion force. There is no expansion force. There are just paths of constant width that don't know or care about the properties of the coordinate system that you chose.

This is a very close analogy. FLRW cosmologies have an approximate symmetry similar to the symmetry of the earth around its axis of rotation, and FLRW coordinates are similar to polar coordinates. The cosmological time is the latitude, and the spatial position is the longitude.

The laws of physics are local. If you look at any small portion of the earth (away from the equator), the footpaths on it are diverging. That local divergence (relative motion) is all that the laws of physics actually "see". We humans recognize the overall shape, and the great circles, and choose global coordinates that respect the global symmetry. That's our choice. The universe doesn't care.

1: It is false to say "everything is expending" : space is expending, but objects linked together by forces (like gravity) are kept at same distance. So it's wrong to confuse expansion and simple change of scale.

2: When a wave travels at some speed, front 2 has a delay as compared to front 1, and needs some time to cover the distance to reach former position of front 1. But during this time expansion has enlarged the gap, so the distance between the fronts (which is the wavelength) increases : this is the red shift.

Note that in your example there would actually be red shift. The two spheres are still proportionally equivalent distances apart, which means that they have moved away from each other in terms of a fixed non-shifted frame.

Not the answer you're looking for? Browse other questions tagged cosmology spacetime space-expansion redshift or ask your own question.

31
If spacetime itself is expanding, how could we ever tell?
23
Did Hilbert publish general relativity field equation before Einstein?
10
How is it that distortions in space can be measured as distances?
5
'Doppler redshift' Vs 'Cosmological redshift'
2
Is the sensitivity of the LIGO sensitive enough to measure the "expansion of the universe"? What specifically is the numerical ratio of effects?
0
Cosmological redshift interpretation
1
Broadening of SNIa lightcurves
1
According to some theories space is constantly expanding but at what granularity?

5
Is there a proof that space expanding produces observers at all points that see what we see?
5
Redshift of distant galaxies: why not a doppler effect?
3
Is the universe actually expanding?
0
Why does universe expansion introduce redshift - doppler effect should not apply
3
What is a layman explanation for why the wavelength of light increases when space itself expands?
31
If spacetime itself is expanding, how could we ever tell?
5
How do we know that the space metric is expanding as opposed to objects moving relative to one another?
8
Is there cosmological redshift within the Milky Way?