How can an an ant lift 50 times its own weight and pull 30 times its weight?

According to many sites like this one, an ant can apparently lift 50 times its own weight and pull 30 times its weight. Is it true?

Can it be proved using physics? Though most sites agree that an ant can lift many times its own weight, not all agree with exactly how many times its weight. The explanations provided if any are usually vague and do not use specific numbers. Can a specific numerical value be calculated?

Secondly, how is it possible for the ant to pull 30 times its weight? I find it unbelievable. Can anyone explain this?

This is an example of "scaling laws". Have a look at http://hep.ucsb.edu/courses/ph6b_99/0111299sci-scaling.html - for once Wikipedia doesn't have a good article on the subject.

Whether an ant can really lift 50 times it's weight I don't know, but it can certainly lift many more times it's own weight than I can. The same sort of argument applies to all small creatures. For example it's why a flea can jump much higher relative to it's body size than I can, but I can still jump higher than an elephant!

Do have a look at the link because it goes into a lot more detail than I can here.

Strength goes like area. Intuitively, the cross sectional area of a muscle counts the number of muscle fibers (actually, myofibrils). Thus, $S\propto A \propto L^2$. But mass goes like volume, $M\propto V\propto L^3$. Therefore strength is proportional to the $2/3$ power of mass, $$S\propto M^{2/3}.$$ This equation expresses the fact that an increase in mass does not give a proportionate increase in strength. For example, adding $25\%$ to your mass will increase your strength by about $16\%$, assuming your body composition and neuromuscular skills don't change appreciably.

It is thus not surprising that an ant can lift many times its bodyweight. Precisely how much is more a question of biology than physics, since we are comparing not only organisms of different size, but totally different morphology. 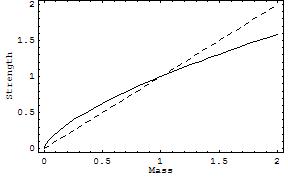 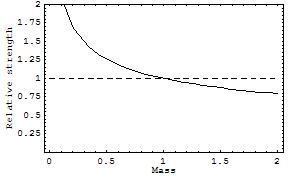 Not the answer you're looking for? Browse other questions tagged forces biophysics biology scaling or ask your own question.

0
Why divide surface area to volume for strength in living beings?
20
Google interview riddle and scaling arguments
11
Why are smaller animals stronger than larger ones, when considered relative to their body weight?

1
Can we feel our own weight (can we feel normal reaction)?
6
If I bury a cylinder (top end sealed) in sand, how much force do I need to pull it out?
3
How much work will a human do to lift a weight?
5
How much energy does a powerlifter need to perform a session of squats?
0
Why can you lift more weight with bad form?
0
Searching for name of a natural constant
22
To lift an object, do we need a force equal to its weight, or greater than its weight?