How does the tuner really work in a crystal set?

I would like to know how and why the tuner works in a crystal set radio. I already know all the theory and the "formal definitions" (this creates a resonant circuit which responds to an alternating current at one frequency) and I have read all the already given answers on the subject. But I can't seem to understand how a resonant circuit "filters" the frequency of a specific radio station.

I already know how induction works and how a LC circuit (capacitor+inductor) works so you can start from there.

Please do not be afraid to give very "deep" explanations.

From your question is sounds as if you understand how parallel LC circuits work, in which case it's easy to explain how an LC circuit works as a tuner.

At that's how the tuner works. The aerial develops a (very) small oscillating voltage by absorbing energy from a radio wave. The LC circuit amplifies the voltage with the amplification being greatest at the resonant frequency. That boosts signals that match the resonant frequency compared to all other frequencies.

The incoming radio wave creates a small oscillating voltage in the antenna. That voltage can drive a current. But how much current will it drive? And how much power can it deliver to a speaker?

The power it can deliver must come from the incoming radio wave. There is no other source for the power. So the wave must be weakened when it passes by the antenna. How can this be accomplished?

When current flows in the receiving antenna, it becomes a transmitting antenna. It radiates power spherically in all directions. So in addition to the power you want to deliver to the speaker, you are also wasting power that the antenna is re-radiating to the universe. So where does the energy come from?

Here is a diagram, looking from above, of the incoming plane waves (straight lines) and the outgoing spherical waves of the receiving antenna: 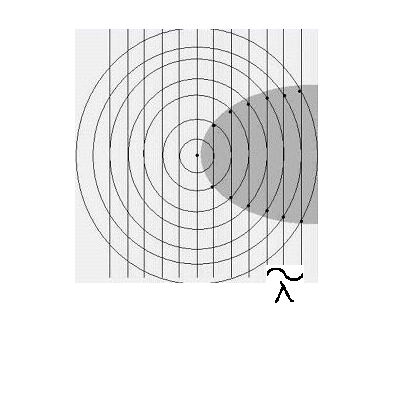 In the shaded region, the difference between the two sets of waves is less than half a wavelength. So it is just possible, if the phase of the outgoing waves is correct, that the two sets of waves could be 180 degrees out of phase with each other...destructive interference. Yes, there is still power wasted by the outgoing waves in all other diretions, but it can be less than the power absorbed in the shadow region. Leaving a residual excess of power that can be delivered to the radio speaker.

The job of the tuning circuit is to adjust the relative phase of the outgoing waves so that this maximum of interference is acheived. A careful analysis shows that under this condition, the power absorbed from the wave is in linear proportion to the amount of current flowing in the antenna. The spherically wasted power is, of course, proportional to the square of the current. Any time you have a linear relation competing with a quadratic relation, there is an optimization whereby the difference is a maximum. This is the condition of matched impedance and it tells you the limit to how much power you can draw from the wave.

It is interesting (and obvious from the explanation given above) that the maximum theoretical power has nothing to do with the size of the receiving antenna. I explain this seeming paradox in more detail in my blogpost, "The Crystal Radio".

As I explain the optimization:

Now, whenever you have two quantities, and one is linear and the other is quadratic, the linear one dominates at first; but then the quadratic grows faster, so it catches and overtakes the linear term. What this means for the antenna is that as you draw current and deliver it to the load, at first you have power available because the power you remove from the shadow zone is greater than the power you waste re-radiating into the rest of space. But as you try to draw more power from the antenna, the wasted power grows much faster than the useful power. The maximum current in the antenna flows when the load is short circuited; in that case, the power removed from the shadow zone is exactly equal to the power re-radiated to the rest of space. The maximum absorbed power is obtained at exactly one-half of this short-circuit current.

Not the answer you're looking for? Browse other questions tagged frequency resonance electronics radio antennas or ask your own question.

8
How does a digital radio tuner work?
1
Half wave rectifier at high frequency and small amplitude ac signal
1
lock-in amplifier - what's the purpose of the low-pass-filter
0
How is information transmitted by radio waves (how radios work)?
0
About The foxhole radio: coil rotation times, whether capacitor's needed
0
Is natural frequency of an LC circuit equal to angular frequency? Why don't the units match?
0
About sound of non-existent channels on FM
2
How do antennas work?