Moment of inertia of solid cube about body diagonal

How do I find the above mentioned moment of inertia?

1.) Triple integrations that proved to be to big.

P.S: I am not familiar with the concept of tensors.

You will get exactly the same result (a factor of 32) if you consider that 2x2x2 cube to consist of eight 1x1x1 cubes and apply the parallel axis theorem.

One of the big tricks that you find helpful is that the inertia matrix of a sphere is of the same form of that of a cube. I'll describe what this means.

For a sphere, imagine the moment of inertia (MoI) about three perpendicular axes through the centre of mass. Each MoI will be the same due to symmetry. Now, rotate the three axes you were just using, and the MoI about each axis is still the same: 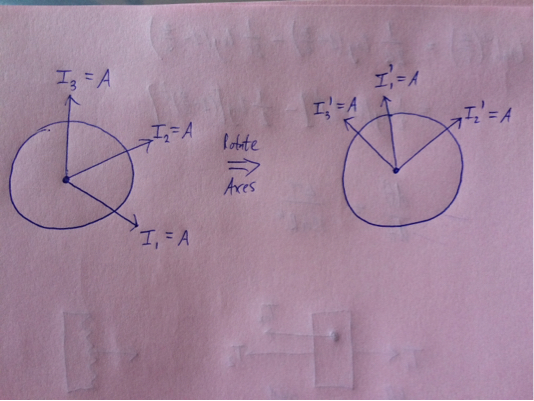 Now, the trick says you can do the same for a cube! So, you can easily calculate the MoI about an axis going through the centre of mass perpendicular to one of the faces of a cube. So you know the MoI about three perpendicular axes. Now, you can rotate the axes such that one aligns with the diagonal, like such: 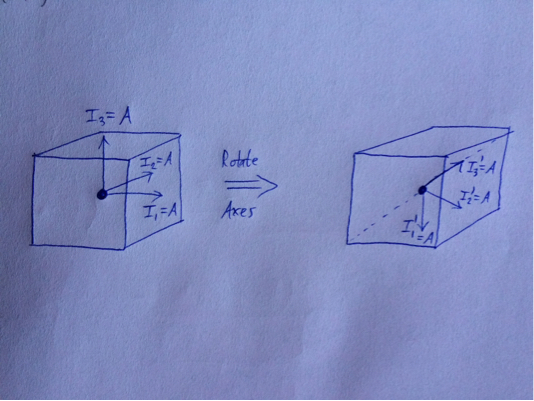 The reason this trick works is because a cube and a sphere have inertia matrices of the same form, and performing rotation operations on those matrices causes no change on either matrix, i.e. rotating axes does not change moment of inertia.

Not the answer you're looking for? Browse other questions tagged homework-and-exercises rotational-dynamics moment-of-inertia or ask your own question.