Why do throwing knives need to be balanced?

To clarify, I do want to the consider the case where the knife is thrown with the intent of spinning. Is it just the case that gravity will cause a torque that will mess up the flight pattern? 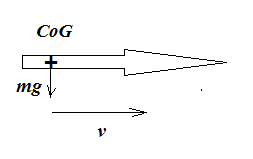 The knife's centre of gravity (CoG, indicated as +) is towards the handle, so it's poorly balanced.

Now the thrower exerts a force $F$ in the direction of the target and this causes acceleration acc. Newton:

After release the knife has a velocity vector $\vec{v}$ in the direction of the target and apart from gravity (and a small amount of air drag) no forces act on the knife.

Acc. Newton's Law the knife will now carry on on its trajectory, apart from starting to fall to the floor due to the weight ($mg$).

There's no reason to believe the knife will start tumbling, rotating, moving upwards or show any other unexpected behaviour, regardless of whether it is well balanced or not. That is what Newton's Law of motion tell us.

I believe (subjectively and based on my own experience) that balanced knives are easier to use as kitchen implements but that has nothing to do with in-flight properties.

I'm sorry, I did mean that I wanted to consider the case where the knife is thrown to spin. I'll fix my question.

We can consider two different types of spin:

a) The knife rotates (spins) around its axis of flight:

This kind of spin is similar to spin imparted on bullets by means of barrel rifling. This imparts on the projectile extra kinetic energy (rotational energy in this case) and increases its resistance to side-wind. But unless significant force or torque acts on the projectile, Newton tell us that its state of motion (trajectory, speed and spin) will not change, balanced or not (bullets, e.g. aren't balanced).

b) The knife tumbles about an axis perpendicular to the flight path:

Think boomerang but without the specific shape and consequent effects of drag. Again, this state of rotation could only be disturbed by means of significant external forces or torques, as anyone who has ever thrown a stick for a dog will have experienced. Balance does not change this.

Not the answer you're looking for? Browse other questions tagged newtonian-mechanics rotational-dynamics aerodynamics everyday-life or ask your own question.

8
Why airplanes fly: the final truth
5
How do objects change their axis of rotation?
15
Why don't hexapods gallop?
0
Center of gravity for best in-flight behavior of oblong projectile
4
Why does sawing action increase the effectiveness of cutting knives?
2
The dynamics of a cornering wheel
1
power = force times velocity of object, what if the object is “abstract” such as “contact patch” of a tire?