I'm currently stumped by the following situation. Say we've got a rectangular physical pendulum (think ruler with a hole-punch at one end).

It's trivial to analyze the motion of the pendulum with the pivot point as the chosen "base." There's no translational motion, and gravity simply creates a torque. There's only angular motion to consider.

However, I'm currently writing a physics engine as a personal project, and I've been doing fine until I ran into this problem (which is purely physics).

In attempting to analyze a pendulum as such to find these qualities, it's much more complicated: 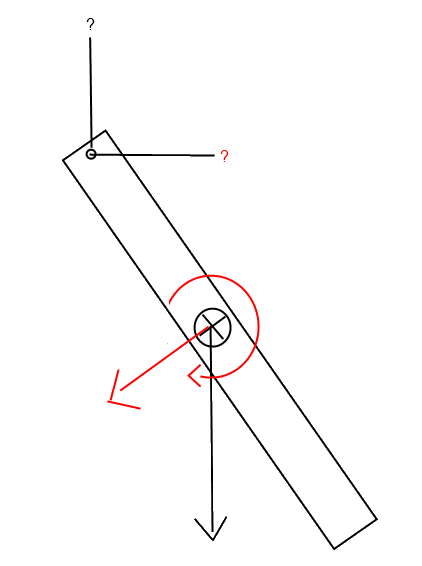 Now, considering the center of mass as the point of reference, The forces in black are those acting on the bar: they are (1) gravity and (2) some concoction of contact forces from the pin that it's swinging on.

The quantities in red are the things that the forces SHOULD produce. I should find a net translational force, and a net torque.

What I've ever learned about physics suggests that I should be able to consider an arbitrary point on the object, and the torque calculations will add up to the same amount. So there should be an equally valid perspective on a pendulum where treat it as if it's both moving and rotating from the center of mass's point of view.

My question is, what is the nature of these contact forces? What insight am I missing about this situation?

In other words, What are the forces in this perspective that give rise to correct pendulum motion?

Thanks for any insight on this, - Chase

To make it easier to analyze, let's decompose this 'reaction' force on the pivot in directions perpendicular $(x')$ and parallel $(y')$ to the bar (instead of the indicated $x$ and $y$ you indicated). Let's call these components $F_x'$ and $F_y'$.

Now, let's calculate the torque about the center of mass, assuming the pendulum's length is L:

Where $b$ is the angular acceleration of the pendulum about the center of mass. $I(cm)$ for a pendulum is equal to $mL²/12$. Hence:

The final problem is determining the relationship between $b$ and $a$. That is easily done considering the center of mass rotates in a circular motion about the pivot, hence:

$L/2$ being the radius of the circumference described by the pendulum's center of mass. Making the substitution:

Remember that $P_x' = mg*sin(\theta), \theta = angle$ between the pendulum and the vertical direction $y$.

Which is the same differential equation you would obtain considering the torque about the pivot? Don't forget $b$ is the second time derivative of $\theta$.

I hope this clarifies your doubts a bit. As for the nature of these forces, they are of electromagnetic origin (just as any normal force) caused by the bond strength of whichever materials are in contact at the pivot. And yes, I am considering there is no attrition and hence energy dissipation.

Not the answer you're looking for? Browse other questions tagged classical-mechanics forces rotational-dynamics statics or ask your own question.

6
How to find the center of rotation? (2D)
1
Center of Mass frame
0
Examining the effect of three forces with no net force, torque or compression/tension
0
Center of Mass/Torque
2
What is the physical meaning of torque about an axis outside the body?
1
What causes the mass connected to the end of a pendulum to speed up when its pivot is moved?
1
Finding Direction of Angular Velocity
1
How can you take torque about an accelerating point that isn't the center of mass?