Is it possible to learn about an event that occurred outside of your observable universe?

I have mixed intuitions about this.

On one hand, nothing can travel faster than the speed of light and if there is enough space between you and an event then a signal will get stuck in the middle of nowhere traversing an ever-expanding void.

But, on the other hand, it seems reasonable enough that we could share information with other distant observers. That coupled with the fact that every observer has their own observable universe centered on them suggests to me that it would be possible to transmit an account of an event that another observer could never experience firsthand. While the information would have to travel farther than the radius of an observable universe, no individual particle would have to. 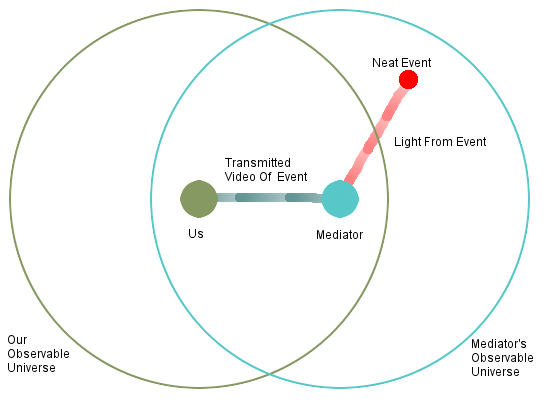 Edit: To clarify, I'm talking about an observable universe limited by the Future horizon caused by the expansion of space and not the Particle horizon caused by how far particles could have traveled given the age of the universe. As it stands right now, a mediator wouldn't be able to see anything novel since, as HDE226868 points out, our Particle horizon would have expanded to encompass the event by the time their forwarded signal would have reached us.

Edit2: Several answers have stated that any mediator would have been taken outside of our observable universe by the time it was able to transmit anything novel. But, is that going to always be the case? I was under the impression that gravity was sufficient to counteract the expansion of space to bind galaxies together. Is it unreasonable to suppose the existence of a mediator that has the appropriate velocity and acceleration to maintain a constant position relative to us for an arbitrary length of time despite the expansion of space?

Perhaps the movement of such an object has a relativistic effect on its observable universe?

Edit3: I think I figured out a good lead. While the Particle horizon is a ball around every observer and based on particles just not having had enough time to travel, the Future horizon is based on redshift which in turn is based on relative velocity among other things.

This suggests to me that two observers at a fixed position relative to each other (i.e. https://xkcd.com/1522/) will have the same Future horizon due to the Doppler effect. However, there seems to be some room to reduce redshift back from infinity with some engineering.

For instance, a telescope in orbit around a planet would be able to see farther while pointing prograde than anyone on the planet since its relative velocity to distant events would be lower and signals would be blueshifted back up from infinity. This actually seems to suggest that a mediator could peer beyond our Future horizon for us.

However, there are some other factors that go into redshift other than the Doppler effect. Gravity wells and the expansion of space also have an effect. But, would these other effects frustrate this scenario?

Is it possible to learn about an event that occurred outside of your observable universe?

The mediator in the question is a physical thing. Whether it's a human or some other contraption, it's still physical and works by the same rules as everything else in the universe. Whatever physical process happens at mediator is just another cog in the machine, so to speak. If information from "neat event" intersects with mediator's space-time point, and then eventually finds its way to you, then neat event is part of your observable universe by definition.

Whether you're talking about future horizon or particle horizon, there's no sensible way to define "observable universe" such that adding an extra space time point and calling it "mediator" allows you observe things outside the observable universe.

The answer to this is "no." The reason for it can be seen intuitively with a bit of work, but it's not at all obvious, so I think it's a good question.

Let us first start thinking about a distant galaxy that starts out in our observable universe but then moves out of it. Later on I will introduce a mediator between these two. At first we can see the other galaxy because the light it emits eventually reaches us. However, because the universe is expanding it moves away from us over time. Eventually a distance is reached such that any light emitted from the other galaxy will never reach us, effectively because the distance is increasing faster than the speed of light.

It's worth noting that when the other galaxy passes this point it doesn't just suddenly seem to wink out of existence from our point of view. As it approaches the cosmic horizon the light it emits takes longer and longer to reach us, so that it becomes more an more red-shifted. In exactly the same way as an object approaching a black hole's event horizon (and for exactly the same reason), in principle we could always detect the galaxy if we had impossibly sensitive equipment to observe low-frequency photons, but it would appear "frozen in time" at a point just before it crossed our cosmic horizon. We cannot observe any events in the other galaxy that take place after that time.

The point of this is that the cosmic horizon is a boundary in time as much as in space, and the expansion of the universe is an integral part of the story. (Without it there would be no horizon at all.) We'll see shortly that the expansion also plays a key role in understanding why the mediator can't pass on information about what's outside our horizon.

Yes. Your observable universe keeps growing. You just have to wait around until your past light cone grows enough to encompass that event. (This answer doesn't account for universal expansion.)

If you first learn from some mediator (perhaps a "detector", who is more "sensitive" than you are) about an event (in which you didn't participate yourself)
then, thereby, you have learned about this event (learning the identities of who took part, and their indictions at their meeting) nevertheless.

This implies: If you had been more "sensitive" (or even "perfectly sensitive") you might have learned first about the event under consideration even directly yourself, and no later than you actually did through the mediator. Consequently this event is called "(in principle) observable by you"; it belonged to your "observable universe".

In turn, it is not possible to learn about an event which didn't belong to your observable universe, by definition.

On one hand, nothing can travel faster than the speed of light

Where "speed of light" is understood here as signal front speed, regardless of whether the signal exchange is specifically "electro-magnetic", or not;
and "travel" is understood as involving the exchange of signals.

But, on the other hand, it seems reasonable enough that we could share information with other distant observers.

It depends: signalling between each other can be possible for some pairs, but not others, and not necessarily "both ways"; cmp. "hyperbolic motion". Therefore it can certainly be imagined that there are events which don't belong to your observable universe, and that the observable universes of two participants (who are and eventually remain separate from each other, even if they may have met each other in the past) are unequal, as in your sketch.

Not the answer you're looking for? Browse other questions tagged cosmology space-expansion information observable-universe or ask your own question.