I'm designing a very simplistic particle simulator. Particles are dropped on a spinning disc and then bounce back (although lose some momentum due to the friction of the disc). I'm working with an arbitrary coefficient of friction so the numbers don't really matter, but I am curious whether more than the y-axis direction changes when something is dropped on a rotating disc.

Right now an object hits the disc and immediately bounces back up: it's y-direction is reversed and decreased due to friction, but would the x- or z-direction also change considering the disc is rotating and may impart some angular momentum? I want to stress the object collides with the disc for a monumentally small amount of time, it might as well be 0. 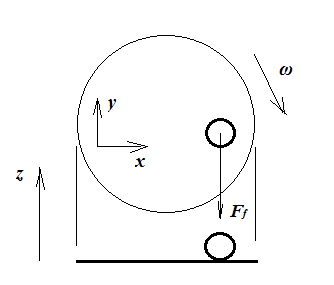 Top is a bird's eye view (down the $z$-axis) at the moment the object impacts the rotating disc, bottom is a view along the $xy$-plane.

At impact an impulse force caused by the vertically falling object acts on the disc and solicits and equal an opposing impulse force $F_N$, during the small interval of impact. $F_N$ causes the object to rebound in the $z$-direction.

But assuming there is friction between object and disc during the interval of impact, also a friction force $F_f$ acts in the $y$-direction, usually modelled simply as:

This has two consequences:

1) Acceleration in the $-y$ direction:

Acting only during the impact, it will impart a velocity $v_y$ in the $-y$-direction.

2) For a round object, rotation about the $x$-axis:

$F_f$ also causes torque about the horizontal central axis of the object with radius $R$:

which in turn causes angular acceleration $\dot{\omega}$ according to:

where $I$ is the inertial moment of the object. During the small interval of impact it impats an angular velocity $\omega$, viewed from the left this will cause clockwise rotation.

Note that if the object isn't round, tumbling instead of pure rotation may occur.

Not the answer you're looking for? Browse other questions tagged angular-momentum vectors simulations or ask your own question.

1
Deviation of free falling objects (Coriolis effect) using conservation of angular momentum
2
Magnetic force and torque for 2D neodymium ball simulator
0
How can angular momentum of an object needed to make another object rotate be calculated?
1
Balance of a rolling coin
0
Factor of 2 error in angular momentum / Coriolis force calculation
1
A game of boxes with rotating gears