Bandgaps of Silicon and their application in active optical elements

I know that silion has an indirect bandgap at $E = 1.12 \, eV $ or $ \lambda = 1.107 \, \mu m$ and I have read that active optical processes like absorption and emission have a decreased likelihood to occur in silicon due to an additional phonon that is required to satisfy the conservation of momentum. I also know that for this reason silicon is usually not used to build light emitters and solar cells on silicon base are only used for other technical reasons.

What I do not understand is ...

I really think I got something completely mixed up. Any ideas? I would really appreciate a hint. Thank you! 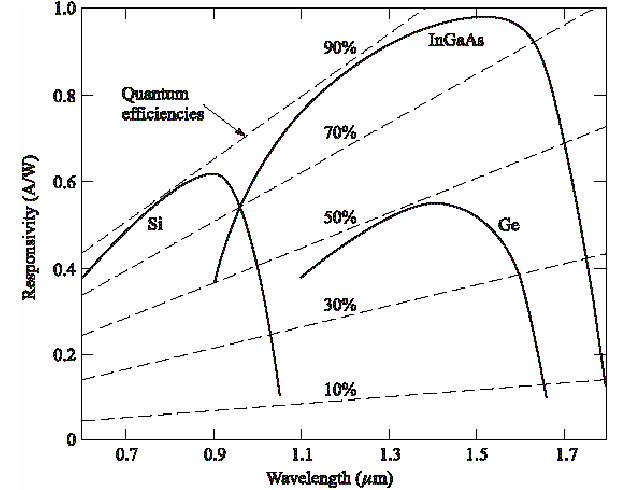 Lets get one thing clear up front - while absorption is a part of quantum efficiency, it is not the only part. You not only have to turn the photon in to an electron-hole pair, you also have to transport those carriers out of the device to be considered. This means other material properties and device design come in to play. Quantum efficiency is not an intrinsic material property. Plots like the one you show are for some 'optimal' device design, where 'optimal' usually means best across a reasonable wavelength range.

Now, that being said, lets get on with it. Silicon absorbs just fine, as any plot of absorption vs frequency (wavelength, energy, ...) will show you (see, for example, Sze, Physics of Semiconductor Devices, Figure 27). Note that to get more photons absorbed, you may need to increase the thickness of the active volume, but you can certainly absorb photons. Note that the absorption process creates phonons (no barrier to that occurring in the process), while emission requires destruction of a phonon (so you are limited by the existing phonon population). It is not a symmetric process. Than, you need to transport the carriers out of the device. This means carrier lifetime. For silicon, the minority carrier lifetime is about 2.5 milliseconds. For GaAs, it is about 10 nanoseconds. So, if you make carriers in a Si device, there is a very good chance they will get out. That explains question #1.

For question 4, the direct gap at k=0 is at 4.1 eV, which is at 300 nm (as you note). However, the plot you show cuts off before 300 nm, so you should not draw any conclusions from that. And, as the figure in Sze will show you, the influence of the direct gap on total absorption is pretty darn small - there is plenty of absorption going on already, so that direct gap has very little effect. But, as indicated, both Ge and InGaAs are also showing a drop in quantum efficiency far above their bandgaps. This is a consequence of the fact that quantum efficiency is tied not just to material parameters, but to device design as well. If you create all the e-h pairs right next to one side of the junction (high absorption coefficient in the material), half of them have to go all the way across the depletion region to be collected.

Not the answer you're looking for? Browse other questions tagged semiconductor-physics electronic-band-theory absorption photon-emission or ask your own question.

1
Depletion region thickness in solar cells
0
Determining energy gap of silicon and germanium semiconductors
0
Confused on relation between bandgaps and pn-junction operation
0
How do the silicon atoms at the edge of crystal satisfy their valancy?
1
The n-type dopant elements on silicon
4
Do silicon solar cells act like an LED when you flip the voltage, or are we just seeing black body radiation?