Why do particles in the molten wax near a burning candle wick get pushed away?

Have a look at this clip I made of my candle burning:

I can accept that the molten wax gets sucked into the wick (though not quite sure why: capilary action?).

But why does it also seem to get thrown outwards when it reaches the wick? I would expect a build-up of residue (particles, dust) near the wick, if anything.

That is simply convection.

The wick does suck molten wax, and it goes up by capillary to the middle of the flame, but that movement is way to slow to explain the fast particles in your video. Moreover they are moving in the opposite direction!

Convection happens because the wick is hot, and it makes the wax around also hot, so the wax expands a little and gets lighter. Since hot wax is lighter it will go up (because of buoyancy). And since it goes up around the wick, it will go to the sides when it reaches the surface, then cools in contact with air and goes down. 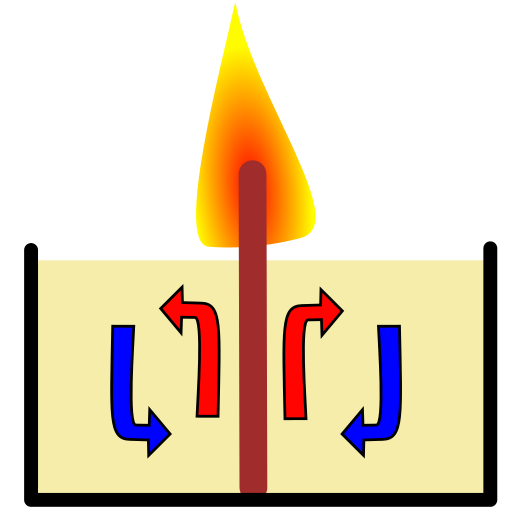 Note how the red arrows curve to the sides when they reach the surface. That is what you see in the moving particles.

In your video you can even see the black particles moving towards the wick when they go down, doing full circles, just as in the graphic.

Usually, in convection the heat comes from below, as in this graphic from Wikipedia. The effect is similar, but instead of having the heat source at the bottom, it would be just in between two red arrows. 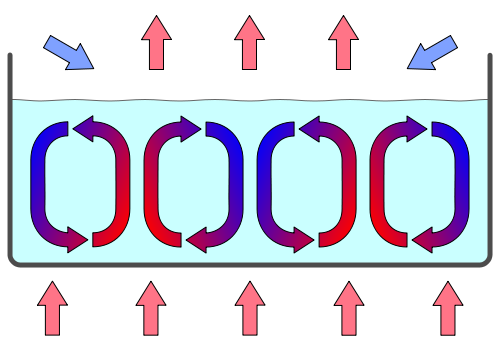 @rodrigo answer is partially correct. One thing he forgot to mention was the effect of the surface tension. The motion of the particles in the molten wax pool is a combination of cellular convection currents coupled with diffusion due to the so-called Marangoni effect. The viscosity of wax is dependent on its temperature. Wax close to the flame surface is less viscous, so the particles can move faster in it, with less friction,when close to the flame. The particles begin to slow down as they approach the cooler wax further away from the flame which has higher viscosity. As the particle slows down, a diffusion dominated force due to the surface tension difference allows the particle to move back towards the flame.

For additional information: see Fluid Mechanics of a Shallow Fuel Layer Near a Burning Wick

Not the answer you're looking for? Browse other questions tagged thermodynamics fluid-dynamics everyday-life combustion or ask your own question.

13
How do candles and wicks work?

11
Why is compressible flow near the choke point so efficient?
13
The Mysterious Reverb in a Jar of Hair Gel
5
Why does heat lose its energy as we get further away?
17
Why is the bottom part of a candle flame blue?
60
How did my candle wax crawl up the sides of the jar?
8
Intuitive Cause for End Corrections
0
Why did these stalagmite-like structures form on the side of my candle?