How to keep a helium balloon between 1 to 5 meters above ground? (without it being tied)

I understand that helium balloons rise because their density is less than air, so they can rise up to a point where the air surrounding it has the same weight as the balloon. I was thinking to fill it with something like half air and half helium. Will this work? If not, is there a way to do it?

If you have a "slack" balloon (one with no elasticity, like is used for some extreme altitude work like the one Felix Baumgartner used for the highest free-fall) 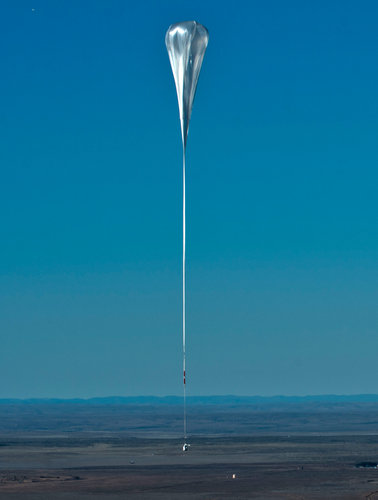 then the pressure inside is the same as the pressure outside, and the balloon will not find an equilibrium position due to pressure (the volume of air displaced will change with altitude, and the weight of air displaced will be unchanged). As Peter Green pointed out, if such balloons reach a "fully inflated" state at a certain altitude, then they will stop rising (reach equilibrium) - assuming they don't burst because of the pressure differential that will build up. For weather balloons this allows for sufficiently fine altitude control; but it is nowhere near the 1-5m range you are asking about.

On the other hand, if you had a perfectly rigid container, then it's conceivable that you will see a height at which the "balloon" would stabilize. It's worth noting how small the pressure gradient is. The approximate equation (ignoring certain large-scale effects) is

From this it follows that the pressure changes by 1% for a height change of approximately 88 m; if you want to stabilize over a range of 1 - 5 m, you need to have a rigid balloon with a mass that is correct to within 0.05%. But of course the ideal gas law still applies, so a 1C change in temperature will change the density by about 0.3%. This means the temperature has to be known (and stable) to about 0.1C before you can even think about it...

But wait - there's more. The pressure inside an ordinary (toy) balloon drops as the balloon increases in size: this means that a "real" balloon with elastic walls that is initially too light will not only rise - it will keep rising, as the buoyancy actually goes up as the balloon gets higher since the elastic skin becomes less capable of sustaining a pressure difference as the balloon gets bigger. Typically the result is that the balloon will eventually burst - hence the need for a "slack" balloon for high altitude work.

Now if you just have a thin string hanging from the bottom of your balloon, and it drags on the ground, then the additional weight of string that the balloon carries will cause it to find a stable height - even without it being tied.

Final note: indoors, there is typically a bit of air current which significantly affects the motion of a "free" balloon. And "cheap" helium balloons have significant leakage, meaning that a balloon that has the correct buoyancy one moment will be too heavy the next. I once did an experiment where I inflated a balloon and hung a box of matches underneath; I then waited until the balloon-with-matchbox landed, would take out one match, and watch it float off again. It would take about 10 minutes for it to "land", and I repeated the cycle. That gave a neat way of estimating the leakage rate for that particular type of balloon, in "match weights per hour".

if we confine our discussion to weather balloons, like this one

and assume the Ideal Gas Law, we can greatly simplify the problem. The balloon is limp; it is not under tension, and the pressure and temperature of the hydrogen or helium are the same as those of the surrounding air.

Assume that we put 2 grams of hydrogen (or 4 grams of helium) into the balloon. Depending on the local temperature and atmospheric pressure, this introduced gas will occupy some particular volume (the same for the specified weights of the two gases). The volume will be close to 22 litres since the molecular weight of hydrogen is 2.00, and the atomic weight of helium is 4.0)

Now the sneaky part. This volume will displace an equal volume of air, and that volume will have a mass of around 29 grams, since the air is at the same temperature and pressure as the balloon gas, and the "molecular weight" of air (a mixture of mainly oxygen and nitrogen) is around 29.0

As the balloon rises and the surrounding temperature and pressure changes, the volume of the gas will change, but the net lift per gram of gas will not change.

Ideal gases (of which real gases are only an approximation) obey the relationship $PV = const$ (at constant temperature). This won't work because pressure falls as altitude increases. As the balloon rises, the pressure outside the balloon falls, and it will expand, increasing its volume, and decreasing the density of the gas inside.

In the real atmosphere, the temperature also has ot be taken into account, but its effect should be roughly the same for both air and helium.

You might be interested to have a look at my answer to Why do helium balloons rise and fall? where I answer a closely related problem.

There will be a pressure at which the bouyancy equals the balloon mass, and in principle the ballon will hover at this pressure. The trouble is that (as others have said in comments) the pressure changes only very gradually with height so the range of heights over which the balloon has effectively neutral bouyancy will be quite large. The balloon motion will be dominated by random air currents and I suspect you have no chance of getting it to hover at a selected height between one and five metres.

If you are indoors, then...

If you have problems with turbulence mixing the hydrogen and air layers, try to hold your breath and stop moving around so much. If there is still too much turbulence, evacuate the air in the bottom half of the room and replace it with sulfur hexafluoride.

Nope, there's no way for this to work unless you want to tie a string. The reason being this: There's no different between the density of air between 1m to 5m or similar range.

So if the balloon's net density is less than that of air, it would continue to rise. Similarly if its more than air's density, it would sink to the ground.

The best chance you have is(highly unlikely practically) that you have very little amount of helium in the balloon so that the net density of the balloon including the plastic is equal to that of air. (plain air filled balloon has density more than air due to additional plastic) So it would just float in place.

In theory the pressure of air decreaes with altitude. So if your balloon is fully inflated, inelastic and does not burst it will float up to a given height and stay there.

The problem is that the pressure variation over the range of heights you are working with is tiny. Also the pressure of air is not constant, it's weather dependent.

So what can we do about it?

Not the answer you're looking for? Browse other questions tagged atmospheric-science air buoyancy fluid-statics or ask your own question.

104
Why is filling a balloon from your mouth much harder initially?
5
Why do helium balloons rise and fall?