Modern explanation of the Young experiment with Quantum Field Theory?

In the Young double slit experiment it is possible to detect the arrival of individual photons as well as an interference pattern.

It doesn't makes much sense to me that something could be either a particle either a wave, neither the use of the wave function collapse to explain individual photon observation.

I have therefore been reading answers to this question on stack exchange, and quite reasuringly, wave-particle duality is considered wrong. Quantum field theory is refered as the correct answer, however it is never explained in any details.

What is the (advanced) layman explanation of Young experiment with QFT?

Thinking about this paradox, I found an explanation that I believe is convincing:

Is this explanation consistent with QFT?

You write that you do not like the wave-particle duality explanation of the Young experiment, and therefore turn to QFT.

Before going further I would like to point out that the double slit experiment is a one-particle effect. That means you only need consider one particle at a time to explain what is happening. Because of this QFT will not buy you much as it is a theory that becomes most useful when particles are interacting. To understand the double slit experiment, ordinary single particle (Schroedinger equation) quantum mechanics suffices just fine. It that framework the wave particle duality is very much alive (as it also is in QFT by the way)

This is a matter of choice how you look at it. You could view the photons as de-localised particles if you wanted to. In the experiment we will typically not do this as their energy is so low that we will almost only see the wave part of the wave-particle duality.

This is a bit of a misunderstanding/simplification. All matter is quantum mechanical to it's nature and in that respect there is no probablisic interaction.

On the other hand, we still don't have a good understanding of what happens when quantum superposition give way to classical correlations. (I.e. the measurement problem still lacks a satisfying resolution) In that sense we can make the approximation that quantum systems are measured probabilistically by macroscopic matter.

First, your explanation is...sort-of-right. What's travelling is a quantum object, not a particle, not a wave. The probability of detecting a particle-like localized blip with some sort of detector is given by a probability density $\rho$, which is the "sqaured amplitude" of a "wavefunction" $\psi$.

For free particles, the Schrödinger equation that $\psi$ obeys is indeed a wave-like equation. However, it is complex-valued, and cannot be directly measured. There are different possible wavefunctions which nevertheless produce the same probability density, you cannot distunguish between them, and this wave obeys the quantum mechanical Schrödinger equation, not any classical physics of waves - it's just that in the case of a free particle, it looks very much like classical wave mechanics.

So what's travelling is a quantum object, encoded by a wavefunction, which is something different from a classical wave.

This explanation - that objects obeying a wave-like equation evolve and interfere in this case very much like classical waves, and that their squared amplitude gives a probability of detecting them - is indeed consistent with quantum field theory, as shown in "Young's Double Slit Experiment in Quantum Field Theory" by Kenmoku and Kume.1, which additionally shows that this is also consistent with classical wave behaviour (i.e. for photons, it is shown that the quantum field theoretic, quantum mechanical and classical predictions for what the states of the quantum electromagnetic field, the photons, and the classical electromagnetic field do at the double slit are consistent).

But there is no easy way to see what the quantum field theory says. You have to read the paper and do the math.

1Thanks to JohnRennie for linking this in a comment.

In the Young double slit experiment it is possible to detect the arrival of individual photons as well as an interference pattern.

Yes, I rather like this picture on this Hitachi webpage myself. It's electrons rather than photons, but no matter:

It doesn't makes much sense to me that something could be either a particle either a wave, neither the use of the wave function collapse to explain individual photon observation.

It shouldn't be a big problem if you've ever looked at the optical Fourier transform, see Steven Lehar's webpage. An interaction can result in something wavelike looking pointlike:

I have therefore been reading answers to this question on stack exchange, and quite reassuringly, wave-particle duality is considered wrong. Quantum field theory is refered as the correct answer, however it is never explained in any details.

Who says wave-particle duality is wrong? A photon is a particle, but it has an E=hc/λ wave nature. Think of it as one wave. It has a wavelength, but it can look pointlike in an interaction.

What is the (advanced) layman explanation of Young experiment with QFT?

I'm not sure there is such a QFT explanation. But there may be in future. Check out weak measurement and work by Aephraim Steinberg et al. This is a depiction of a photon going through both slits: 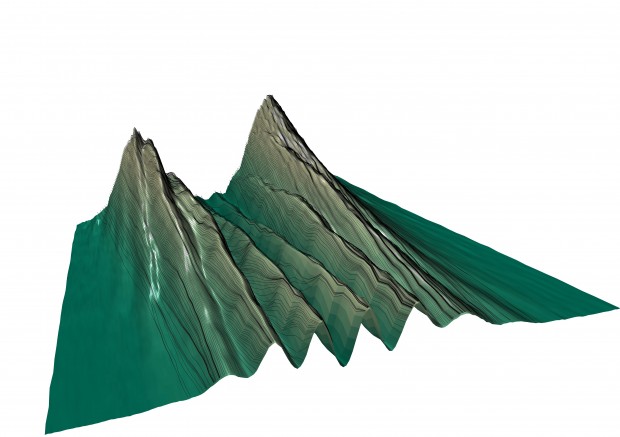 Also check out work by Jeff Lundeen et al. I gather Aephraim used to be Jeff's supervisor. See this:

"So what does this mean? We hope that the scientific community can now improve upon the Copenhagen Interpretation, and redefine the wavefunction so that it is no longer just a mathematical tool, but rather something that can be directly measured in the laboratory".

Thinking about this paradox, I found an explanation that I believe is convincing: there is no individual particle travelling, only waves waves only probabilistically interact with matter (like it is the case with neutrinos) waves have a certain probability to interact with matter which depend on the energy at a given physical location (which depend on waves superposition) and on the material used to build the detector (should not be transparent at the wavelength used by the coherent source) Is this explanation consistent with QFT?

I think so. But don't forget the wave nature of matter. You've got waves interacting with waves. Everything is fields and waves. And don't forget that optical Fourier transform. Imagine you detect a photon at slit. It gets converted into something pointlike. So it goes through that slit only, hence no interference. Then when you detect it on the screen it gets converted into something pointlike. What's the problem?

Not the answer you're looking for? Browse other questions tagged quantum-field-theory wavefunction double-slit-experiment or ask your own question.

9
How is the double slit experiment modeled in contemporary physical theories?
62
Is the wave-particle duality a real duality?
12
DIY Quantum Eraser Experiment by the Scientific American: Is this really quantum?
2
How does the Wave Particle Duality fit with Quantum Field Theory?
3
Does QFT re-interpret the meaning of the wave function of Schrodinger's equation?
2
Double Slit Experiment. What effect does the detector actually cause?
0
Is the interaction of the electron w/ a photon in the double-slit experiment simply distorts the experience & not the consciousness of the observer?
4
Individual particle states in Fock space