Does the second law of thermodynamics imply a spacetime beginning of the universe?

At the classical framework , i.e. no General relativity and astrophysical observations of the 18th century , this is a valid question. When talking of a "Universe" one must have a model , and the model depends on the state of physics knowledge at the time of the model.

The second law states that entropy always increases or stays the same. One can make a model in the classical framework, where entropy starts at zero and keeps on increasing. It is a model for those who needed a beginning of the universe, as religious persons.

Other models could be devised, of a universe starting at time -infinity at some entropy which continues to increase with time, and is at the point where the universe is now.

Physics has progressed since the eighteenth century. There exist astrophysical observations that have been fitted with a specific model, and at the moment this is the standard cosmological model. 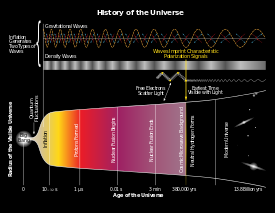 History of the Universe - gravitational waves are hypothesized to arise from cosmic inflation, an expansion just after the Big Bang

The colored portion towards the beginning of the universe on the left is not amenable to thermodybamics on a large scale for its homogenization, because of special and general relativity the regions of the universe cannot come to a thermodynamic equilibrium universally, only locally, so no entropy of the total universe can be defined before that.

It is General Relativity that gives the functional dependence of space and time towards the beginning, and quantum mechanics with particle creation up to the white age on the plot. At the white region a quantized gravitational field is hypothesized which creates a consistent picture of the observed CMB spectrum of the universe at our site : earth at this year.

So entropy has little to do with the beginning of the universe in the standard model of cosmology.

No. A low entropy "initial state" could be the result of a so-called anthropic fluctuation in a (past) eternal universe.

Fluctuations about equilibrium could, fortuitously, create the initial conditions for life as we know it. This was proposed by Boltzmann and his assistant Schutz in the late 19th century, though ultimately deemed unsatisfactory by a succession of physicists, notably Eddington and Feynman. Critics stressed that in an anthropic fluctuation, one should expect maximum entropy compatible with life (this is related to the Boltzmann brain paradox). This, or something like it, remains, however, a logical possibility.

This discussion assumes some level of ergodicity.

Not the answer you're looking for? Browse other questions tagged thermodynamics cosmology entropy big-bang or ask your own question.