How can we see the moon while it's between the Earth and the Sun? [duplicate]

Ask Question
Asked 4 years, 11 months ago
Active 4 years, 3 months ago
Viewed 4k times
4
$\begingroup$
This question already has answers here:
Why CAN we see the new moon at night? (8 answers)
Closed 4 years ago.

I know this sounds like (and probably is) a stupid question, but I can't figure it out.

As far as I know, the crescent shape of the moon is when the moon is on the sunny side of the Earth, but that wouldn't explain how it can be seen from the night.

Horrible, not-to-scale and probably completely wrong diagram of what I think here: 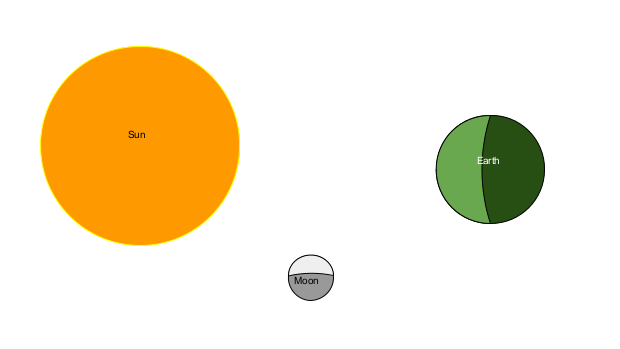 How is it that we can see clear to the other side of the Earth?

It's still not quite to scale — the Moon is actually a lot further away from the Earth than shown here — but it should suffice to demonstrate that the moon can indeed be seen from the night side of the Earth even when it's nearly between the Earth and the Sun. Note how, in the orientation shown in the diagram, the side of the Moon visible to Earth is almost completely dark, with only a thin crescent lit by the Sun.

The diagram also illustrates some notable properties of the Sun-Earth-Moon geometry:

Of course, another reason why we can see the crescent Moon is that the Moon is actually quite visible even during the day: 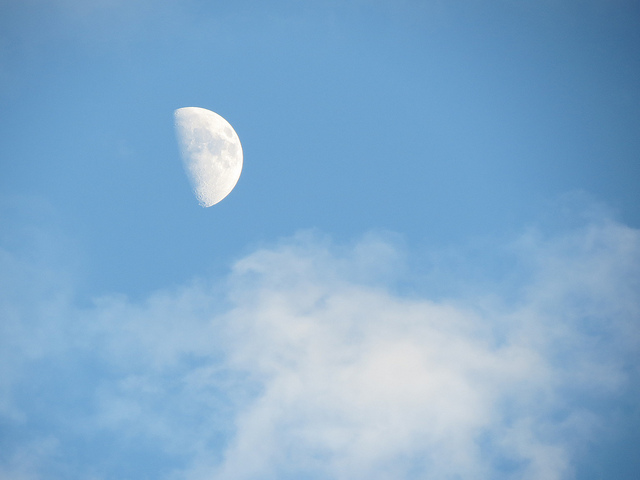 Daytime Moon and Clouds by Alana Sise @ Flickr, used under the CC-By 2.0 license.

Your diagram is not quite to scale, and the errors are important. Notice that only the hemisphere of the moon which points toward the sun is illuminated, rather than what your drawing shows. This has the following implications.

1) When the moon is new, it rises and sets at the same time as the sun, and is not (mostly) visible at night. The extreme example of this occurs when there is a solar eclipse.

2) When the moon is full, it rises at sunset and sets at sunrise, and is visible during the entire night.

3) When the moon is at half-illumination, it is only visible for half the night.

So the answer to your title question is "We can't."

The dark portion of the moon is not actually dark, since it is illuminated by light reflected by the earth. When the sky is dark, you can see the dimly-illuminated portion fairly clearly, but during daylight hours the sky is brighter than the dark portion of the moon, and that portion is invisible against the sky. That's why you can't see the moon just before and after a solar eclipse.

How can we see the moon while it's between the Earth and the Sun?

This phenomenon is called "Solar Eclipse". You do not really see the moon, you simply do not see the sun because of the moon which block the sunlight.

Not the answer you're looking for? Browse other questions tagged everyday-life earth sun solar-system moon or ask your own question.

17
Why can we see the moon when it is between the Earth and the Sun?
47
Why CAN we see the new moon at night?

9
Can you tell just from its gravity whether the Moon is above or below you?
25
How fast is the Earth-Sun distance changing
5
How long did the first rainshowers on Earth last?
5
How does the Moon cause the tides?
3
Which will collide first, the moon and Earth, or Sun and Earth?
19
How can a full moon be seen south of an observer's location?
1
How does the Sun burn a crescent shaped scar in your eyes during a solar eclipse?