Why do riders feel forced down into their seats at the bottom of the first drop on a rollercoaster?

I am trying to figure out what forces an $80.0kg$ rider travelling at $110.0km/h$ ($30.56m/s$) would experience when at the bottom of the first drop on a rollercoaster where the radius of the curvature of the track at this low point is $45.0m$. This is part of a centripetal force review. Here is a free body diagram of when the rider is at the bottom of the first drop: 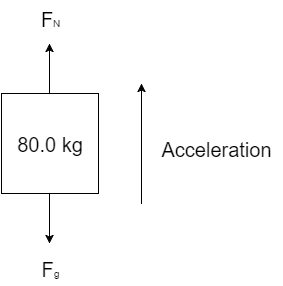 I found that the force of gravity is:

The normal force is:

Now my question is: Why does the rider feel forced down into his seat?

To think of it another way, the reference frame of the rider's seat is accelerating and by staying with the seat the rider must accelerate as well. Since the rider usually just experiences $\mathbf{F}_{g}$ while at rest on a flat surface, if that surface were to suddenly "jump" into the air vertically, the rider would feel an additional magnitude of the resting $\mathbf{F}_{N}$ due to the acceleration of the surface. This must be true since the rider does not accelerate with respect to the surface itself, thus the force exerted by the surface on the rider must increase in response to the increased acceleration.

If the roller coaster idea bothers you, try thinking about a swing. In order to move in a circular arc, the chain/rope attached to the swing seat must exert a tension force that is not balanced because circular motion corresponds to $d\mathbf{v}/dt \neq 0$, i.e., acceleration.

The key is this: how is the force applied to the rider? Gravity pulls directly down on the passenger's mass, but what keeps the passenger from heading towards the center of the Earth?

When you're in the passenger seat of a sports car, and the driver floors it, you feel pushed back into the seat. But what's actually happening is that the seat is pushing you forward. Either way, the contact force compresses the cushion.

Here, what keeps the rider from heading downwards is the force provided by the upward-accelerating rollercoaster car, through the car's seat. The result is that you feel pushed into the seat.

Not the answer you're looking for? Browse other questions tagged homework-and-exercises forces acceleration centripetal-force free-body-diagram or ask your own question.