One can find in the wikipedia the following assertion:

Upconversion should be distinguished from two-photon absorption

However, it is difficult to tell the difference between both processes by looking at the articles (1, 2). What is, exactly, the difference, and when is one or the other process exploited experimentally?

These two processes are fundamentally different processes. The Photon upconversion Wikipedia article has some problems with it, notably by including the image (first imaged below) that is of a two-photon nonlinear optical process. 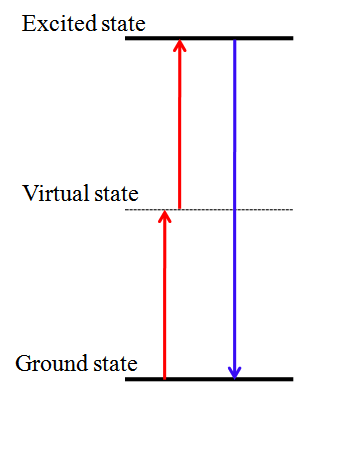 A two-photon nonlinear process (such as two photon absorption) is when two photons interact with two levels in some atomic (or atomic-like) system as pictured above. Two photon resonance occurs when the sum of the two photon energies becomes close to the difference between two energy levels of the system (listed in the picture as ground and excited state), and so the two photons are absorbed at the same time, leaving the system in a higher energy state.

By contrast a photon upconversion process is messier, as it is not caused by a single nonlinear process, but is rather the result of a sequence of processes. This can happen in a few different ways. For instance two different atoms (or molecules etc) can each become excited by absorbing some optical energy, putting each system into an excited state. Then these atoms/molecules can exchange energy thermally (such as by colliding with each other) putting one atom/molecule into an even higher energy state which will then fluoresce at a higher frequency than the incident light (which is called "upconverted" because the light is at a higher frequency and thus the photons are at a higher energy).

Another upconversion process shown in the image below (that is much more accurate than the above image from the Wikipedia article), is where a system absorbed a single photon, and then after some time absorbs another photon (possibly after relaxing or decaying to a metastable state/level first) which then fluoresces (again this light is the "upconverted" light). This image is taken from the article here which is more accurate and better written than the Wikipedia article. Note that this image is a higher order upconversion process, as it involves at least three photon absorption events rather than two. 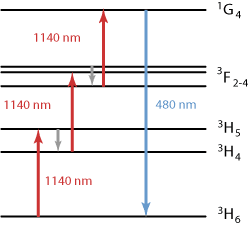 Edit: I removed the confusing/inaccurate image (first image above) from the photon upconversion Wikipedia page.

The sequential absorption of photons leads to the excitation of electrons from ground level to its next higher energy state(metastable state of longer lifetime), there it absorbs another incoming photon and being excited to the higher excited state then decay to the ground state producing emission of higher energy photons than the incident one is known as upconversion process but in case of two photon process the simultaneous absorption of photons by the system taking place.

Not the answer you're looking for? Browse other questions tagged photons atomic-physics virtual-particles non-linear-optics or ask your own question.

2
Can a fluorophore emit a higher energy photon than it absorbed
7
By what mechanism is a photon emitted or absorbed in atomic electron state transitions?
2
What is the difference between upconversion and two-photon absorption?
2
Virtual photon exchange instantaneously
0
How should two-photon transitions be modelled? Is second-order perturbation theory required? Or are sequential first-order processes sufficient?