I am a second year undergrad physics student and up until now have done some classical mechanics and some electrodynamics. For some reason I have always been really interested in light. A couple of weeks ago I was talking to my professor about photons and special relativity and he referred me to a "must read" experiment from the 1960's:

I have been trying to read it for the past couple of days but it is very difficult. I have also tried other resources like wikipedia but they have not been very helpful.

Could someone maybe "dumb-down" this diagram for me and explain (in 2nd year undergrad language) what is going on in this experiment. 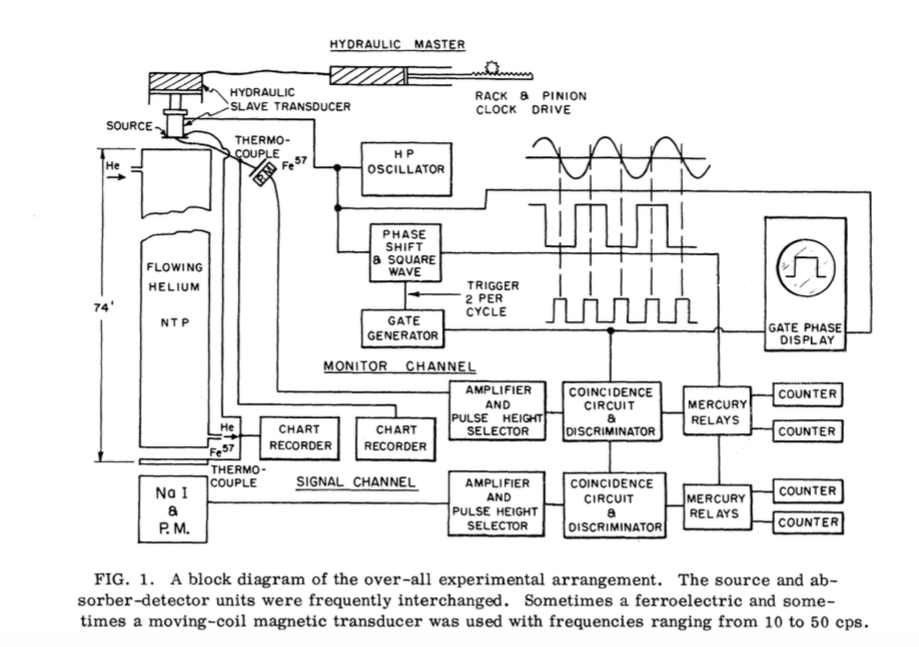 Ignore the diagram. It's complex because it includes all the various bits of electronics required for the experiment and that confuses the issue. The experiment is just a variant of Mössbauer spectroscopy.

To measure the size of the red shift the upper target is mounted on an oscillator and moved up and down at a variable velocity $v$. This velocity causes a Doppler shift in the light received at the target. The experimenter varies the velocity $v$ (using all the complicated electronics) to maximise the absorption. Since at the maximum absorption the Doppler shifted energy has to be 14.4keV the experimenter subtracts off the Doppler shift to get a value for the red shifted energy. Compare this with the original 14.4keV and you have a measurement of the gravitational red shift.

1
In the Pound Rebka Experiment, how were the gamma rays generated?
1
about the Pound-Rebka experiment and the answer to a second year undergrad student' s question 7 months ago

1
A spontaneous wavefunction collapse thought experiment
0
Do we have to observe gravitational red/blueshift from a single frame?