I'm reading this paper by Margolus and Levitin

What is special about this inequality? It just seems to have come out of nowhere. It's reasonable that it should include both the real and the imaginary parts of $S$, but why not just take $\mathrm{Re}(S)+\mathrm{Im}(S)$ on the LHS, for example, or why not any other linear combination whatsoever; also, what is special about the RHS?

So, aside of this details, I would like to know how to obtain this result in a more systematic way, or in any case, how is the procedure by Margolus and Levitin justified or explained with more detail.

It took me a while to figure it out, even though it was obvious from the start that it should be ridiculously simple. Reminded me of the (in)famous question about the plane and the conveyor belt in that sense. The longest part was to figure out why we need to maximize time even though we're supposed to look for the minimum time. I guess that's because I'm not used to the concept of a tight inequality.

Of course, as March noted in the comment, we can just take some arbitrarily large value of $c$ and get, say, $\cos x \ge 1 - 1000 x - \sin x$, and it follows that $x \ge \frac{1}{1000}$ then. Or we could set $c=10000$ and get even smaller $x$. But that is not our objective here! We aren't looking for an inequality of the form $x \ge x_0$, where $x_0$ is some arbitrarily small number. If that was the case, we wouldn't even have to worry about writing complicated inequalities. We could just say $x \ge 0$ and be done with it. But that certainly doesn't mean that $t=0$ is the earliest possible time when the state $\left | \psi_0 \right\rangle$ can evolve into an orthogonal state. It would only mean that the time $t_0$ when it happens satisfies the $t_0\ge0$ inequality, which is trivial.

It follows that we're looking for the largest possible $x_0$ so that $x \ge x_0$ is still true. Or we can say that we're looking for the most restrictive inequality for $x$, or simply a tight inequality. The logic here is that it's the inequality that contains the maximum possible information. What is the radius of Earth? If we don't know exactly we can say it's more than 1 millimeter or more than 1 meter. Which of these statements contain more information? Obviously the latter. If we say it's more than 6000 km, we'll be giving even more information.

That essentially means that the inequality should turn into the equality for some values of $x$ because once we get to that point, we can't get closer without breaking it at some points. Moreover, since both $\sin x$ and $\cos x$ disappear when we substitute the real and imaginary parts, what we'll get in the end will be $0 \ge b-cx$ or $x \ge \frac{b}{c}$. That means we should try to maximize $\frac{b}{c}$ while keeping the inequality tight at the same time. Therefore, we should look for the largest possible $b$ and the smallest possible $c$.

Let's substitute $x=0$ into the inequality

Now we're looking for $a$ and $c$. And we're trying to minimize $c$, remember! But we don't actually care about $a$ as long as the inequality holds true. This leads us to thinking about other values of $x$ where $a$ doesn't matter. We've already checked $x=0$, so let's consider $x=\pi$ now:

For $x=\pi$, this gives us $a=\frac{2}{\pi}$. The following plot illustrates how deviating from this value breaks things: 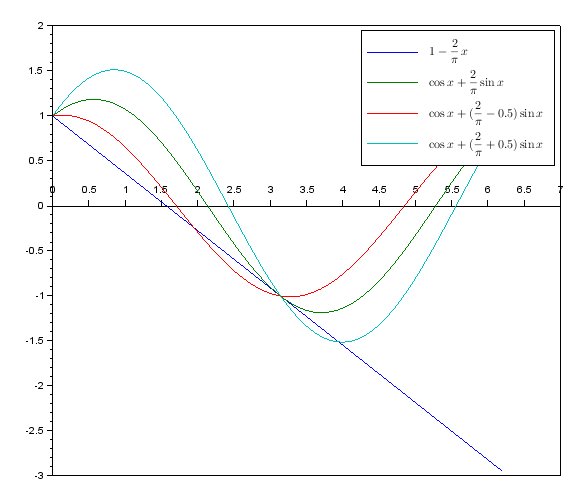 Not the answer you're looking for? Browse other questions tagged quantum-mechanics quantum-information or ask your own question.

3
How does a state in quantum mechanics evolve?
1
Energy and probability for the particle in a box
1
Applying Ehrenfest's theorem to Hamiltonian
3
Expectation value of $a_i^\dagger a_i$ for thermal density matrix
1
Eigenstates of a harmonic oscillator
1
Thermodynamic expectation value at $T=0$
2
Decomposing a prepared quantum harmonic oscillator state
2
What's the time derivative of the Annihilation operator?
0
“General” for time evolution of quantum state
1
Which spin-1/2 photon states can be used in the context of Bell's inequality violations?