In which direction, the force of gravity directed towards?

I am not being able to answer, where is actually the force of gravity directed towards ?

Look at this picture. 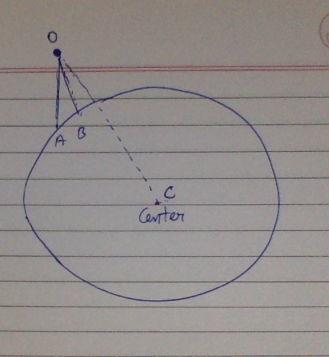 This is a planet with the centre ‘C’. And O is an object. Every point of the planet is attracting the object,The points A and B are also pulling it towards themselves, then why do we say, the force is directed towards the centre?

Also, If i drop the object, will it move towards A , B or towards the centre ?

You have to think of the symmetry of the situation. For each point A and B, there is a point A' and B' opposite the center line that has an attractive force pulling in such a way that the components perpendicular to the center line are canceled. Therefore, the net force is along the center line.

As @tmwilson26, said the net force is directed along the center, here's the mathematics of it

if there is a small differential mass at A, there also exists another point A' laying just opposite to the center line(making a same angle $\theta$ with the center line)

due to symmetry the $x$ components cancel out since they have equal and opposite directions, which leaves behind the $y$-component which is the radial component

If the planet is spherically symmetric, the gravitational field is the same as if all the mass were concentrated at the center, so the attraction will be along the line toward the center. If it is not, it is not really fair to talk of the center. Imagine if there were a huge mountain at point A. This could change the gravitational field (a small bit) to pull the object more toward A. The equatorial bulge of the earth tends to pull satellites into the equatorial plane. You get a more complicated gravity model, which matters to some things and not to others.

Not the answer you're looking for? Browse other questions tagged homework-and-exercises newtonian-gravity or ask your own question.

3
Intuitive understanding of Lagrange point L3
2
Does the gravitational force of a massive, spherical body draw only towards its center of gravity, and to no other area?
1
Force of Gravity of a stationary object acting on another object moving through space
0
Do I apply any force towards right when I move an object towards right through air (neglecting air friction)?
1
Proving that gravitational potential is work done by the object against gravity while KE increases and PE reduces
0
Doubt when calculating the gravity force excerted by a planet to an object on its surface
0
Every Object with mass have gravity?