How does a cyclist moves the center of mass of the cycle-cyclist system?

Consider the image shown below, 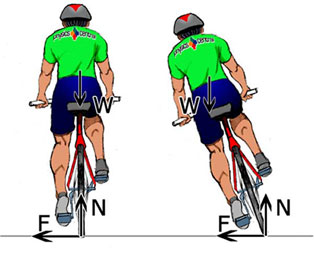 In the left diagram the centre of mass of the system lies upon the perpendicular from the point of contact. But in the right diagram the centre of mass has shifted towards left to the perpendicular from the point of contact. When the cyclist tries to lean the cycle towards left, his body should lean towards the right making the COM unshifted. All the cyclist can do is provide internal forces which would be always in pairs. That is if the cyclist applies a force F to the cycle then the cycle will apply an equal and opposite force -F to the cyclist. But in real life this doesn't happen and the cyclist easily shifts the COM. My question is how is this possible?

How is the cyclist, by just providing internal force, able to shift the center of mass of the cycle-cyclist system

You constantly move your point of support to cause yourself to fall one way or the other.

If you don't like the way you are falling, you move your point of support to stop that fall, and then start falling the other way.

Your point of support is never stationary. If it is, you fall over.

On a bike, you move your point of support left or right by tiny steering motions you're not even aware of.

(There's more physics involved, and some mystery about it, but this is the basic idea.)

There has been an apprehension about whether the cyclist can take a turn without steering. In my opinion he can. There are two principles he can use. These are

For simplicity consider the case of a standing man and tight rope walker. While standing on two feet on plane ground, if we suddenly lift the right foot we will eventually fall to the right -- why? Because we have shifted the line of normal reaction from ground to only our left foot and the gravity still acts upon the C.M. causing net torque upon the body. Now this fact can be used by tight rope climber who uses a long stick for balancing. What he has to do is suddenly take off his right hand from the stick but hold the left hand tightly. The normal force upon the stick acts through only left hand and the gravity acts upon stick's C.M. causing a net torque upon the stick-walker system. This was method 1 for shifting C.M sideways.

The tight rope walker uses another method as mentioned by Mike Dunlavey in the comments. The rope walker tries to rotate the stick in clockwise direction. By Newton's third law this causes the human body to rotate anti-clockwise. [Let's recall, for the moment, how a car works. The engine puts the tires into rotation and for the conservation of angular momentum the body of car gets the angular momentum opposite to that of tires. This is prominent when we press the accelerator full on the first gear. Eventually the car moves horizontally, i.e. the C.M. of car-tires system moves horizontally. What happens is the tires tend to rotate and they kind of strike the contact point on earth's surface. The surface pushes the tires with a measurable force. The C.M. of the car-tires system moves in the direction of push.] The human body is just like tires of car in stick-walker system. The body tries to rotate and in doing so it pushes the rope at the point of contact and the rope pushes the feet sideways causing a net external sideways force to act upon the human-stick system. The net force is responsible for shifting the C.M. sideways. This was method 2.

The cyclist can use method 1 by first leaning forward towards front tire. Now he has to take the right hand off and hold the left hand tight tightly. The normal reaction on the upper parts of body are not in line of gravity. This will cause net torque and the cycle will turn right.

For method 2, the cyclist tries to rotate the cycle anticlockwise which would cause his body to rotate clock wise. Now the C.M. should not shift sideways. But just like the tires of car the cycle as a whole acts as kind of car tire trying to rotate which causes the earth surface to push the cycle at the point of contact. Hence a net external force acts sideways upon the cycle-cyclist system causing the C.M. to shift sideways. Then the gravity can provide net torque.

Method 2 is also mentioned on wikipedea:

For a monowheel, both direction and speed are controlled through the same physical apparatus; this generally makes steering more difficult. In a majority of systems, change in direction is affected by the rider shifting his or her weight(method 2), or in the sudden movement creating a shearing force(usual method like steering the front wheel of a cycle) between a handhold and the axis that the driver is settled on

Not the answer you're looking for? Browse other questions tagged newtonian-mechanics classical-mechanics forces rotational-dynamics rotational-kinematics or ask your own question.

2
Normal force in a compound pendulum (physical pundulum) system?
1
Why does centre of mass of ice-container system shift in absence of any net external force?
2
Consistent method for finding direction of static friction
0
Position of centre of mass during toppling
1
Center of Mass frame
0
Why does the center of mass of car- Earth system changes with the car moving while no external forces acting?
0
Does a force does more work on an extended body?
6
Why Front part of a body undergoing rolling pushes the surface a “bit more”?
1
Bending of a cyclist while taking a turn on a horizontal road
1
How would this multibody system rotate in free space?