Rotation of a cube around its diagonal axis

I have the following multiple choice question that I am attempting to answer: 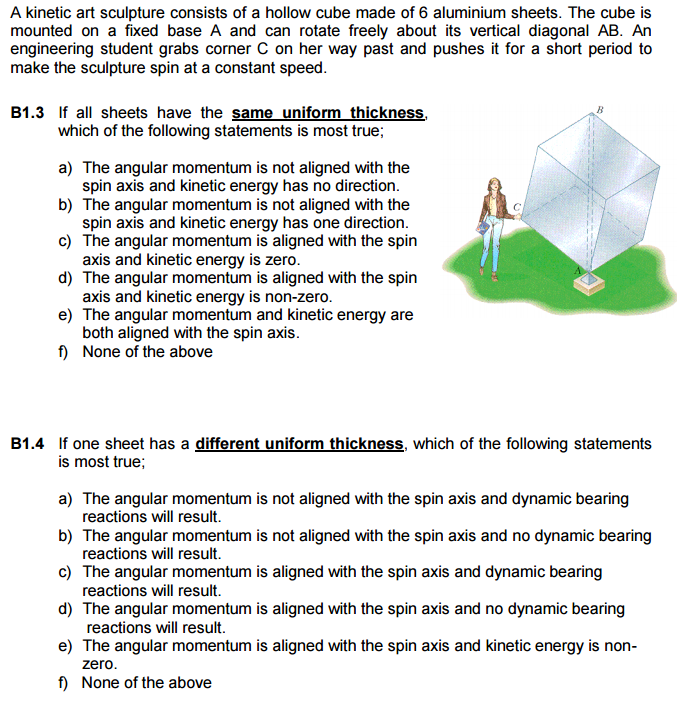 For B1.3, (a) appears to be the most logical choice. It is my understanding that an object whose shape is asymmetric about the spin axis will result in an angular momentum vector not aligned with the spin axis which makes (c), (d) nonviable answers.

Additionally, for (c) nonzero linear or angular momentum means there is kinetic energy so that is definitely not correct.

Kinetic energy is a scalar, not a vector thus it has no direction which discounts (b) and (e) as answers.

I'm a little confused as to what is implied by "dynamic bearing reactions". The way the cube is rotated about the spin axis means there is a couple and changing the thickness of one sheet would unbalance this couple - am I on the right track with this line of thought and have I made any conceptual errors in my reasoning so far?

With regard to question B1.3, one can immediately eliminate options b and e because energy is a scalar quantity, something without direction. One can also eliminate option c because the work of art has non-zero kinetic energy from the perspective of the (implied but obvious) observer frame of reference. That leaves options a, d, and f. The second conditions of options a and d are tautological true, for different reasons. The first conditions of options a and d are diametrically opposed, which means one can eliminate option f ("none of the above"). This question comes down to determining whether angular momentum and angular velocity are parallel in this case.

A hollow cube constructed from six identical thin square plates has an inertia tensor (e.g., see Tensor of inertia of a hollow cube) that looks just like that of a sphere, a diagonal matrix with all three diagonal elements equal to one another. Angular momentum is always parallel to angular velocity in this special case. Therefore, option a is incorrect. The only remaining answer is option d, "The angular momentum is aligned with the spin axis and kinetic energy is non-zero."

With regard to question B1.4, I first have to caveat my answer. I was trained to think as a physicist first and foremost, then as a mathematician, then as a computer scientist, and lastly as an engineer. (I regularly have to restrain myself from asking my engineering cohorts, "Why do you make things so convoluted?")

Rotation of a cube around its diagonal axis

The angular momentum is always aligned with the spin axis by definition and the kinetic energy of a spinning mass is non zero. 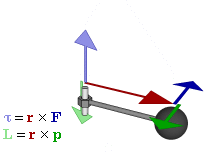 0
Tensor of inertia of a hollow cube