How does an ammeter in a circuit work?

Apologies for this simple question, but I'm having trouble grasping the concept of how an ammeter works.

Taking the following circuit as an example:

When the switch is closed, current flows through the circuit - ie. there is a potential difference between the two ends of the circuit, so electrons flow from the negative terminal to positive.
The ammeter records the current flowing through the variable resistor.

There at least several means that current can be measured using different technologies. The early ammeters used galvanometric technology where a coil in the galvanometer becomes part of the current path. The coil generates a magnetic field and the magnetic field mechanically deflects in an angular fashion a permanent magnet attached to a dial pointer. But in today's technology we can sense the magnetic field using Hall sensors or more often we use a shunt resistor (low resistance resistor) that does not greatly impede the current however allows sufficient voltage drop to determine the current using Ohms Law.

Why and how does a resistor limit the current flowing through the entire circuit? doesn't it limit only the current that is flowing past and after the resistor?

Why and how does a resistor limit the current flowing through the entire circuit? doesn't it limit only the current that is flowing past and after the resistor?

First, this is a DC circuit (ignoring the switch) which is to say that the circuit voltages and currents are constant with time.

Since that is the case, by conservation of electric charge, the current through the ammeter and resistor are identical for, if that were not the case, electric charge would necessarily accumulate somewhere between or within them and thus the voltages and current would not be constant in time.

In reality, Kirchhoff's current law (KCL) is only an approximation that is exact in the low-frequency limit. For frequencies high enough such that the physical extent of the circuit elements is significant compared to the wavelength of the EM waves at such frequencies, 'ordinary' circuit laws such as KCL do not hold.

How does an ammeter in a circuit work?

The most basic ammeter is illustrated in the attached picture. It is simply a wire inserted in an electric circuit with its + and - terminals (like a resistor) and below the wire there is a compass needle that rotates with an angle that depends on the electric current intensity, $I$, through the wire. 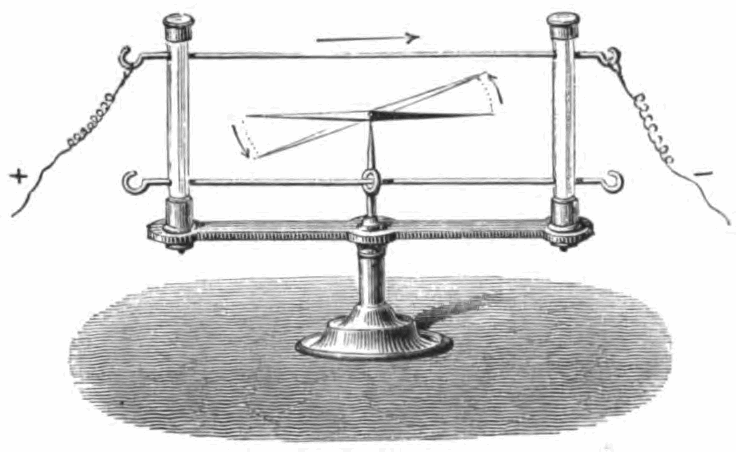 Not the answer you're looking for? Browse other questions tagged electricity electric-circuits electric-current electrical-resistance or ask your own question.

0
Voltmeter forming a closed circuit
1
The inside of a variable resistor (potentiometer)
1
Why does a resistor decrease the current flowing in a circuit if this is what current is?
3
What happens in a circuit before steady state is achieved?
1
Does the resistance in the secondary circuit of a potentiometer circuit affect the balance length?
0
How much current goes through an ideal wire?
0
Conventional current, electron flow and ammeter
0
$RL$ Circuit current derivation