Why don't galaxies orbit each other?

There are plenty of satellite galaxies orbiting larger galaxies. The question is how long are you willing to wait for an orbit?

Even if you did wait long enough, galaxies aren't particularly good at holding their shape. If you put them in a situation where gravity is strong enough to bend their path into a closed orbit, odds are they will also be tidally torn apart by that same gravity. And we see this all the time, as for example with the Mice Galaxies: 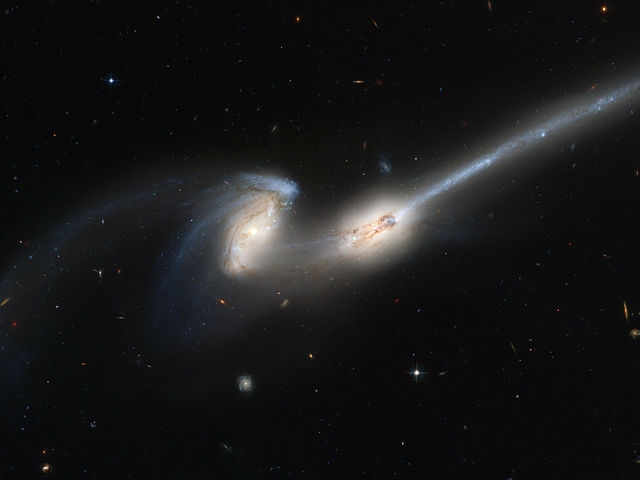 They do! There's an entire class of galaxy, called a 'satellite galaxy' which is defined entirely based on them orbiting a larger galaxy (which would be called a 'central galaxy'). Our own milky-way is known to have many orbiting satellite galaxies, or at least 'dwarf-galaxies'. If dwarf-galaxies aren't enough, the milky-way itself is gravitationally bound to the andromeda galaxy, and they are effectively orbitting eachother. Because of the tremendous size-scales, however, the orbital period is billions of years --- in many cases, far longer than the age of the universe, so that a pair like the milky-way---andromeda 'local group' actually hasn't completed a single complete-orbit in the history of the universe. That's why we can definitely never (even hope to) see galaxies orbit in real-time.

galaxy come in many different sizes: some of the small-er ones do rotate ["orbit"] around the edge of a large galaxy ... one can also visualize galaxy-clusters, in which the entire cluster rotates .....

48
Are modified theories of gravity credible?
12
Does MOND make good predictions?
13
What does a galaxy orbit?
4
Do alternate theories for Dark Matter (like MOND) explain its effect on gravitational lensing?

11
Why do galaxies and water going down a plug hole spin?
12
Does the Milky Way have dark matter satellite galaxies?
0
Which direction does a galaxy move in respect to its axis of rotation (Black Hole)
3
Do satellite galaxies have the same proportion of dark matter as “ordinary” galaxies
0
Gravitation and the structure of galaxies
6
How Much Do Spiral Arms Affect Their Galaxies' Rotation Curves?
0
Orbits within orbits
12
Is dark matter inside galaxies different from dark matter in intergalactic space?