Why don't objects radiate off all of their heat energy?

Imagine a solid box in deep space. Solids are as far as I know constructed by positive nuclei in some sort of coherent structure, with electrons orbiting nearby too. 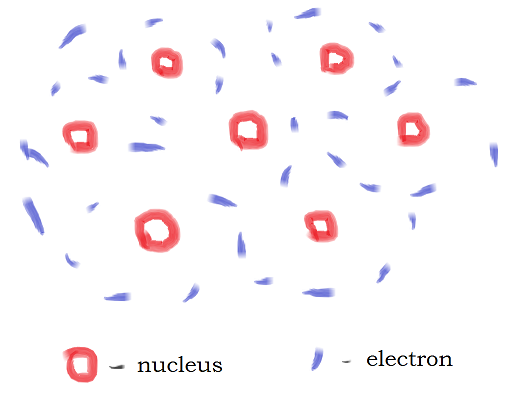 Both the nuclei and the electrons are charged objects, and accelerating charged objects emit electromagnetic radiation. Because of the object's temperature, the nuclei vibrate and oscillate a little bit, meaning that no matter how small, the box should still give off electromagnetic radiation. Over time, the box should lose it's internal 'heat energy', and approach a temperature of $0\text{K}$, where there is absolutely no more vibrations.

However, I know that due to quantum mechanics, electrons that 'orbit' a nucleus don't actually move, but exist in some stationary state, that emits no radiation. Does a similar reasoning apply to the nuclei? Or will they actually continue to emit radiation, and if so, can we calculate the nuclei's average kinetic energy as a function of time?

You're right that the classical idea of radiation emission from an accelerated charge cannot be applied to electrons in orbit around nuclei, and thus they do not emit radiation (unless they're in an exited state and decay to a lower state).

The same thing does not apply to the nuclei. As you suspect, they will, over time, lose energy and vibrate less and less. The rate at which they lose energy decreases, so the temperature decrease only asymptotically approaches the ambient temperature.

So, what do I mean by the ambient temperature? Well, no matter how far away in deep space you place your box, it will be irradiated by the cosmic mirowave background (CMB), which at the moment has a temperature of 2.7 K, and thus your box won't be able to cool below this temperature.

That is, unless you're willing to wait for billions of years. Since the temperature of the CMB itself decreases, patiency can get you arbitrarily close to 0 K.

To add a little detail about radiative thermal equilibrium:

Not the answer you're looking for? Browse other questions tagged quantum-mechanics electromagnetic-radiation temperature or ask your own question.

50
Does a constantly accelerating charged particle emit EM radiation or not?
1
Excited Energy levels of Hydrogen vs Solids
0
Does the EM wave or photon in Infra Red radiation contain energy?
3
How exactly does a Tesla coil make fluorescent light glow?
1
What colour will be an object that reflects some wavelengths while emitting some others?