Is radar-style 'pulse coding' (stretch, amplify, interact, and then compress) used in the optical domain?

Chirped Pulse Amplification (CPA) is an optics technique for producing short laser pulses at intensities which are high enough that the gain medium would destroy itself through nonlinear phenomena like self-focusing and laser filamentation if it tried to amplify the pulse directly, by sandwiching the amplifier between a pulse stretcher and a compressor. In essence, you start with a short, coherent pulse that you want to amplify, and you run it through a pair of matched optical gratings which will stretch it from a few femtoseconds to maybe hundreds of picoseconds, and then you amplify that at a safe intensity. When you're done, you put that through an inverted pair of gratings, which will shorten the pulse into a single blast of energy.

It is common folklore in optics that the technique was originally developed for amplification of radar signals somewhere in the early reaches of electronics history, and it sort of makes sense that if you have a fragile vacuum-tube amplifier or something, you can swap out the optical diffraction gratings for appropriately dispersive microwave waveguides, or whatever they used in the sixties, and it would do wonders to protect sensitive electronics from frying.

As it turns out, however, the radar technique is not quite the same, apparently because the peak-power restrictions hold all the way to the antenna. What they do is something rather clever: they stretch the pulse using a dispersive delay line and then they amplify it, and they send it off uncompressed to interact with whatever planes or ships or aliens are out there. The echo will return at a much lower intensity, but crucially it will retain the original chirp, which means that you can still compress it, without running the risk of having unreasonable powers in your wires or your antennas. 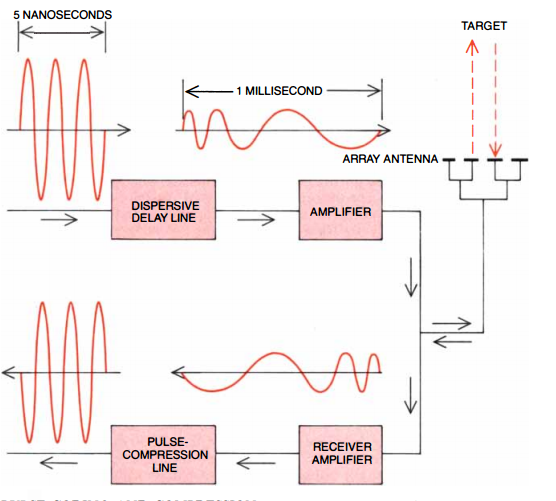 This is a beautiful technique, and at heart it depends only on the linearity of the interaction between the radar pulse and whatever it's reflecting off, and the fact that these reflections will preserve the phase of the pulse. As such, it should be perfectly possible to apply it to a fair number of optical setups. This might be somewhat hard to apply in ultrafast physics, since we tend to be interested in nonlinear phenomena, from the perturbative to the extreme, but even then a nonlinear interaction is likely to retain a coherent trace of the chirp which could then be compressed into something useful.

So: is this a useful technique that can be applied using optical pulses instead of microwaves? If so, I am looking for answers that describe in some detail one or a few broad classes of experiments that use this technique. (More specifically, I am looking for experiments that probe a sample with a chirped pulse, and then collect optical output and re-compress it for analysis.) To be clear, I am not looking for an exhaustive catalogue of such applications, and I would rather have a few clear examples of where and how it is useful than a long list of applications.

I should also emphasize that I do not expect there to be many applications out there if this is indeed a thing. Pulse compression is a very challenging technique, and doing it to something that has interacted with a sample sounds much, much harder. If it turns out that there are many applications out there, then I'd be more interested in learning why it's not that hard after all than in whatever context I'm not thinking of.

Alternatively, it is quite possible that there are in fact no real applications of the stretch-amplify-interact-compress order of events. If that's the case then it is still a remarkable thing, because CPA has sparked an enormous industry, and it powers lasers from the tabletop to the facility scale, and it has proved to be flexible and extensible to, say, optical parametric (CP) amplification. Similarly, the analogy game has proved to be very useful throughout physics, such as in lifting concepts from NMR like spin echoes for use in quantum information schemes, and it would be rather surprising is this idea simply cannot be applied at all for some fundamental reason. If indeed there is such a fundamental reason, then I'm looking for answers that explain why this technique cannot be translated to the optical domain.

In radar, chirp (LFM - linear frequency modulation) is used to stretch the pulse so that the received energy is large enough for detection while having a large coherent bandwidth commensurate with the desired range resolution. There are two ways of detection, the so-called "stretch processing" that is just a correlation receiver using a homodyne mixer, the other is a matched filter. If the target is further out than the pulse length then matched filter is the only way to go. "Stretch processing" (homodyne mixing the return with the reference transmitted signal) followed by a Discrete Fourier Transform as filter bank is used exclusively if the pulse length is much longer than the roundtrip delay. This technique is also very common in synthetic aperture radars to create a high resolution map, it is also used in discrete stepped frequency form.

What makes chirp often less desirable than other potential waveforms is the coupling of the range measurement with the Doppler shift if the target or parts of the scenery is moving. Another problem of chirp is its obvious sensitivity to time/frequency linearity and FM/PM noise as its measured quantity is frequency shift. Note that the generation of a high quality linear chirp over a broad bandwidth is not a simple matter even at microwaves when using a voltage controlled oscillator. A varactor is a notoriously nonlinear device and the oscillator has to be placed in a negative feedback phase or delay locked loop so the frequency sweep be linear. This linearization slows down the potential sweep rate.

In principle, all of this can be done with LIDAR as long as the source can be kept coherent over the observation interval but that is not easy if the target range is more than a few microseconds (150m/microsec), see, Vasyl Molebny, Gary Kamerman, Ove Steinvall: "Laser radar: from early history to new trends" Proc. of SPIE Vol. 7835 783502-29; Pierrottet, D., Amzajerdian, F., Petway, L., Barnes, B. and Lockard, G., “Flight test performance of a high precision navigation Doppler lidar”, Proc. SPIE 7323, 732311 (2009). There are other interesting applications that does not require very long coherence, for example as an instantaneous spectrum analyzer of a very wideband microwave or mm-wave signal.

Not the answer you're looking for? Browse other questions tagged optics electronics radar chirp or ask your own question.

1
Which device amplifies the optical signal in fiber optics?
7
Can we compress microsecond duration laser pulses by a factor of 1000?
3
Why can we not measure the distance to the Sun directly using Radar?
1
How does increasing conductivity increases radar cross section?
0
Nuclear physics timing experiment without Amplifier
276
What is Chirped Pulse Amplification, and why is it important enough to warrant a Nobel Prize?
2
Frequency Chirp, Instantaneous Frequency and Photons
0
Wavelength of Intermittent Laser vs Prism
1
How does optical “self-torque” make sense in terms of Maxwell's equations?
0
Fourier Optics - application of the 4f correlator experiment