When dihydrogen is formed, are photons being emitted?

When a hydrogen in an excited state transits back to the ground state, a photon (or series of photons) is emitted in accordance with the selection rules.

When two free hydrogen atoms in the ground state $1s$ (and with the same wave function parity) approach each other the atomic orbitals interact and a $\sigma(ss)$ molecular orbital is formed and energy is released. The bond Enthalpy for $\mathrm{H_2}$ is $-436\;\mathrm{kJ/mol}$, which can be converted to about $-4.53\:\mathrm{eV}$ per bond formed and corresponds to the VIS/near UV part of the electromagnetic spectrum.

I've always believed that this energy would be released also as a photon (or a series of photons) but is that really true? Or could it manifest itself as an increase in kinetic energy of the formed $\mathrm{H_2}$ molecule? Can either be derived from quantum mechanical principles?

Two isolated hydrogen atoms cannot form an $H_2$ molecule for the simple reason that they have too much energy. Any system formed from the two atoms will have an energy greater than the dissociation energy of $H_2$ so no bound state will be formed.

Observation tells us that the process must happen because there is a lot of $H_2$ around. It happens when three hydrogen atoms collide and one of the hydrogen atoms can carry off enough energy to leave the other two in a bound state. The resulting $H_2$ molecule will generally be formed in an excited state and it can emit one or more photons or it can be quenched by collisions with other hydrogen atoms or molecules. I would guess that if the collision rate is high enough for three body collisions to have any significant frequency then quenching will be the dominant mechanism and very little EM will be radiated.

The third body doesn't have to be a hydrogen atom. If there is a mixture of gases any atom or molecule can act as the third body and carry away the excess energy.

It has been shown experimentally that the formation of H2 can happen in the presence of free electrons: 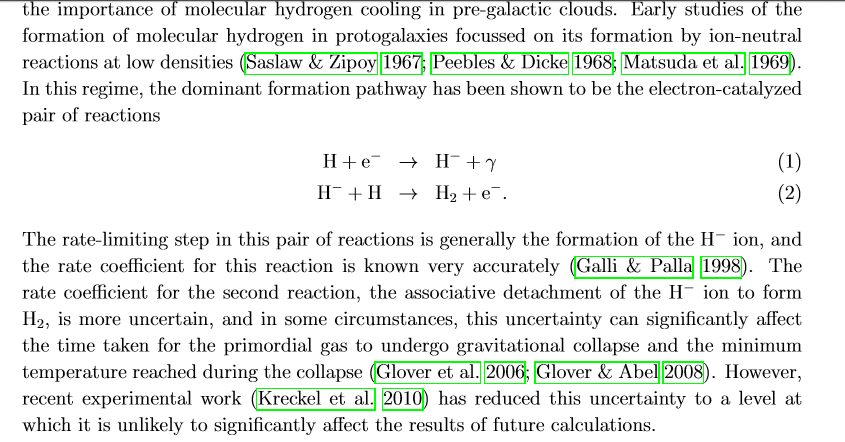 so a photon is emitted in this two step process, taking energy away . Note that this is for low densities. The three body process in the answer by John dominates with increasing density, as discussed in the link.

Not the answer you're looking for? Browse other questions tagged quantum-mechanics photons atomic-physics molecules quantum-chemistry or ask your own question.

8
Photon hitting an atom with higher energy than needed to ionize
4
Why is it energetically favourable for molecular bonds to form from a QM point of view?
1
How does Nitrogen transition between a quarter and a doublet state?
0
What happens once all electrons in a material are in the excited state?
3
Photon spin in gamma decay
4
What is the physical significance of the overlap integral?
1
Absorption and emission of photons
0
What rules govern the absorption of photons by electrons when the photons exceed the work function of the material?