In 1930, Wolfgang Pauli wrote a letter to Lise Meitner for a convention in Tübingen, considering the problem of beta decay.

Does anybody know, where to find the original letter online ?

Here is a pdf file with the letter in both German and English. Screenshot: 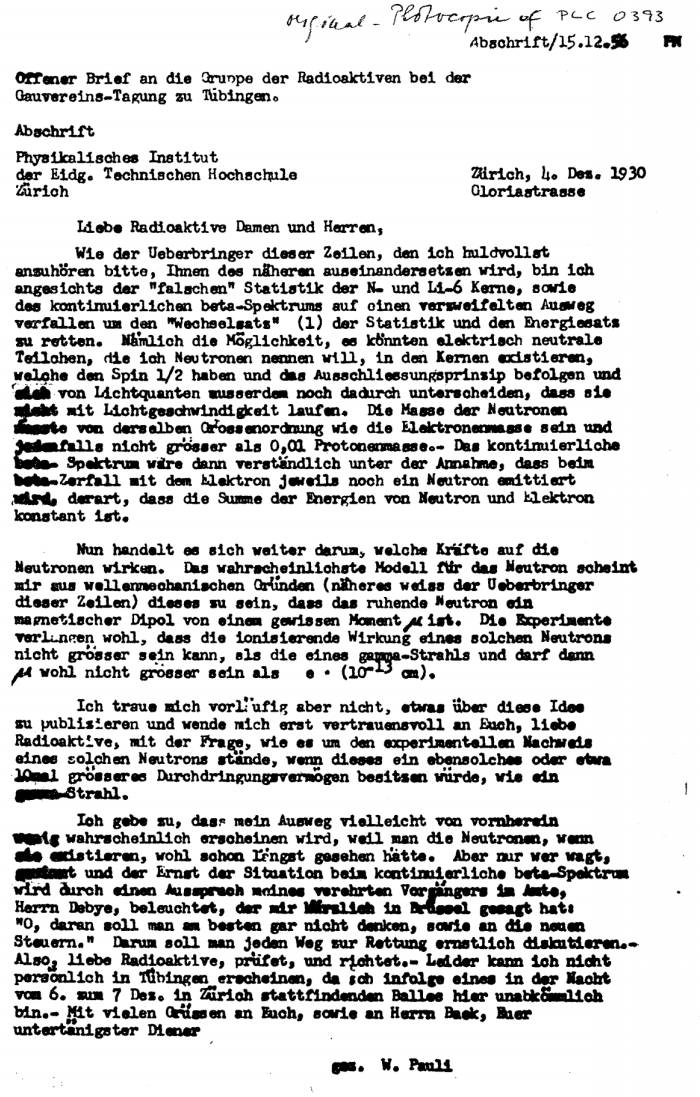 Pasted text of the letter in English - the link also contains the original typed German letter.

Open letter to the group of radioactive people at the
Gauverein meeting in Tübingen.

As the bearer of these lines, to whom I graciously ask you to listen, will explain to you in more detail, because of the "wrong" statistics of the N- and Li-6 nuclei and the continuous beta spectrum, I have hit upon a desperate remedy to save the "exchange theorem" (1) of statistics and the law of conservation of energy. Namely, the possibility that in the nuclei there could exist electrically neutral particles, which I will call neutrinos, that have spin 1/2 and obey the exclusion principle and that further differ from light quanta in that they do not travel with the velocity of light. The mass of the neutrinos should be of the same order of magnitude as the electron mass and in any event not larger than 0.01 proton mass. - The continuous beta spectrum would then make sense with the assumption that in beta decay, in addition to the electron, a neutrino is emitted such that the sum of the energies of neutrino and electron is constant.

Now it is also a question of which forces act upon neutrinos. For me, the most likely model for the neutrino seems to be, for wave-mechanical reasons (the bearer of these lines knows more), that the neutrino at rest is a magnetic dipole with a certain moment μ. The experiments seem to require that the ionizing effect of such a neutrino can not be bigger than the one of a gamma-ray, and then μ is probably not allowed to be larger than e • (10 -13cm).

But so far I do not dare to publish anything about this idea, and trustfully turn first to you, dear radioactive people, with the question of how likely it is to find experimental evidence for such a neutrino if it would have the same or perhaps a 10 times larger ability to get through [material] than a gamma-ray.

I admit that my remedy may seem almost improbable because one probably would have seen those neutrinos, if they exist, for a long time. But nothing ventured, nothing gained, and the seriousness of the situation, due to the continuous structure of the beta spectrum, is illuminated by a remark of my honored predecessor, Mr Debye, who told me recently in Bruxelles: "Oh, It's better not to think about this at all, like new taxes." Therefore one should seriously discuss every way of rescue. Thus, dear radioactive people, scrutinize and judge. - Unfortunately, I cannot personally appear in Tübingen since I amindispensable here in Zürich because of a ball on the night from December 6 to 7. With my best regards to you, and also to Mr. Back, your humble servant

Not the answer you're looking for? Browse other questions tagged specific-reference nuclear-physics radiation history neutrinos or ask your own question.

6
How did Pauli and Fermi deduce the existence of the neutrino?
-1
Is neutron decay a purely electromagnetic phenomenon?
2
Weak interaction and Neutrino
2
Solar neutrino Spectrum - Why are there discrete energies for Be and pep?
1
What is the reason for emission of anti-neutrino during beta emission?
3
Put yourself in the shoes of Wolfgang Pauli (1930): How could Pauli have narrowed the culprit down to one particle, instead of many?
2
Is there an apparatus that measures neutrino spin?
0
What are the fundamental violations in $\rm n \to p+e^-$?
1
When is emitting a particle (e.g. neutrino) the same as absorbing an antiparticle?

1
References for nuclear masses, mass deficits, decay rates and modes
2
Where did Karl Schwarzschild derived his solution?
6
The role of W bosons in the weak nuclear force and beta decay
0
Order of emission of radioactive particles
1
How is the amount of radiation calculated from a decay?
4
How to calculate absorbed dosage
1
Pauli's first paper about the spin