Is gravitational potential always defined for a system?

B)But then I also think it is not true because of the definition I have that Gravitational potential at a point is also defined as..The work done per unit mass by an external agent in bringing a particle slowly from the reference point to the given point.

2)But nothing is being said about another particle(system) in this definition..

3)I am also really confused..with these terms $GP$ and $GPE$ because there are different definition of these in different places..{I took The standard definition of $GPE$ from (Resnick,Halliday) but the book doesn't talk about $GP$}...

Can someone please clarify these??it will be of great help.

What is gravitational potential?

Usually a potential is defined as the potential energy per mass or per charge or similar. This is most often seen in relation to electricity or chemistry and less often to gravity.

Is it defined for the system or the object?

$GPE$ is the amount of energy that can potentially be used as work for pulling an object towards the source. It depends on both the source's mass $m$, on the mass of the other ("target") object $m_0$ as well as on the distance $r$ between them ($G$ being a universal constant):

$GP$ is the amount of energy that can potentially be used as work for pulling one kilogram of mass towards the source. It gives an easier basis for comparison as it does not depend on the specific target object's properties anymore:

BUT it still depends on the distance $r$ between them. $GPE$ is system dependent as it depends on both the object properties and on the system configuration, but even though $GP$ does not depend on the object properties, and thus is defined for the source object alone, it still depends on the system configuration. If no other object was present in the near neighbourhood (if $r\rightarrow \infty$), then $GP\approx 0$.

is GP also defined for a system like say two particles

You can admire in the attached picture the Contours of Equal Gravitational Potential for the system Earth - Moon. 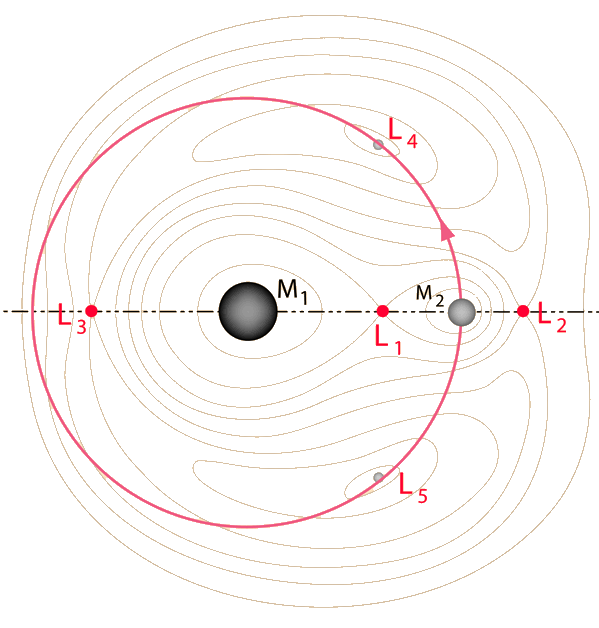 Not the answer you're looking for? Browse other questions tagged newtonian-gravity potential potential-energy or ask your own question.