I am having trouble gaining an intuitive understanding of rotational motion for an object rolling on rough surface, and I have a few questions regarding it.

Let's say that there's a cylinder that starts to roll from rest due to an initial push on a rough, flat surface, like shown below (all arrows marked are forces): 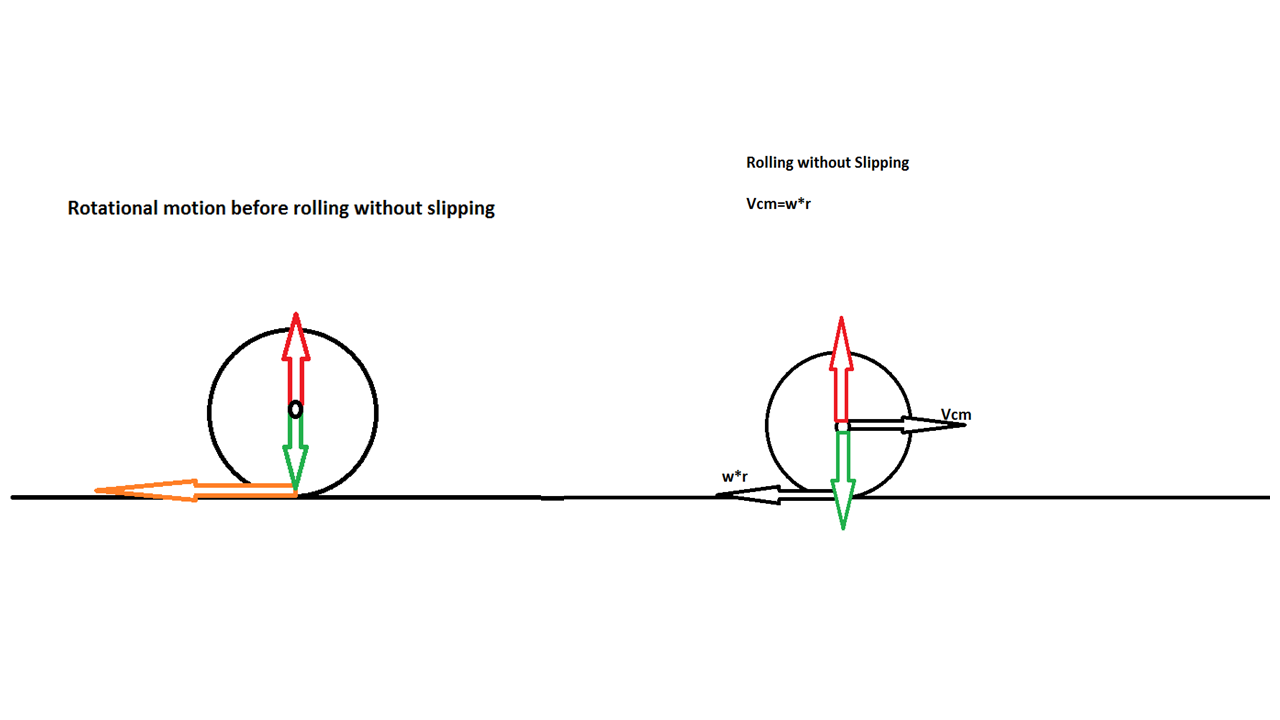 In this case, the cylinder wouldn't be rolling without slipping yet; the only horizontal force acting upon the cylinder would be the friction force, so the net torque about the center of mass marked by the black circle would be radius x frictional force, causing the cylinder to accelerate radially and gain angular speed.

However, I find that the net torque of the cylinder is 0 if I set the axis of rotation as the bottom of the cylinder (the contact point between the ground and the cylinder); my first question is, what accounts for this discrepancy? I suspect there should be a force about the center of mass, but I don't see what could be the source of such force.

Let's say that the cylinder rolls for a while and gains angular velocity to a point where the velocity of the center of mass now equals angular velocity times radius; now let's consider rotational motion for rolling without slipping (right diagram, black arrows are velocities, colored arrows are forces):

I understand how the velocity at the contact point relative to the ground is zero. My second question is, would this mean that there is no friction force other than rolling friction, as I marked on the diagram? I suspect that there should be static friction force at the contact point, but that wouldn't make any sense because then the static friction would provide net torque, resulting in continual angular acceleration of the object.

Finally, let's consider these same scenarios on an incline plane. 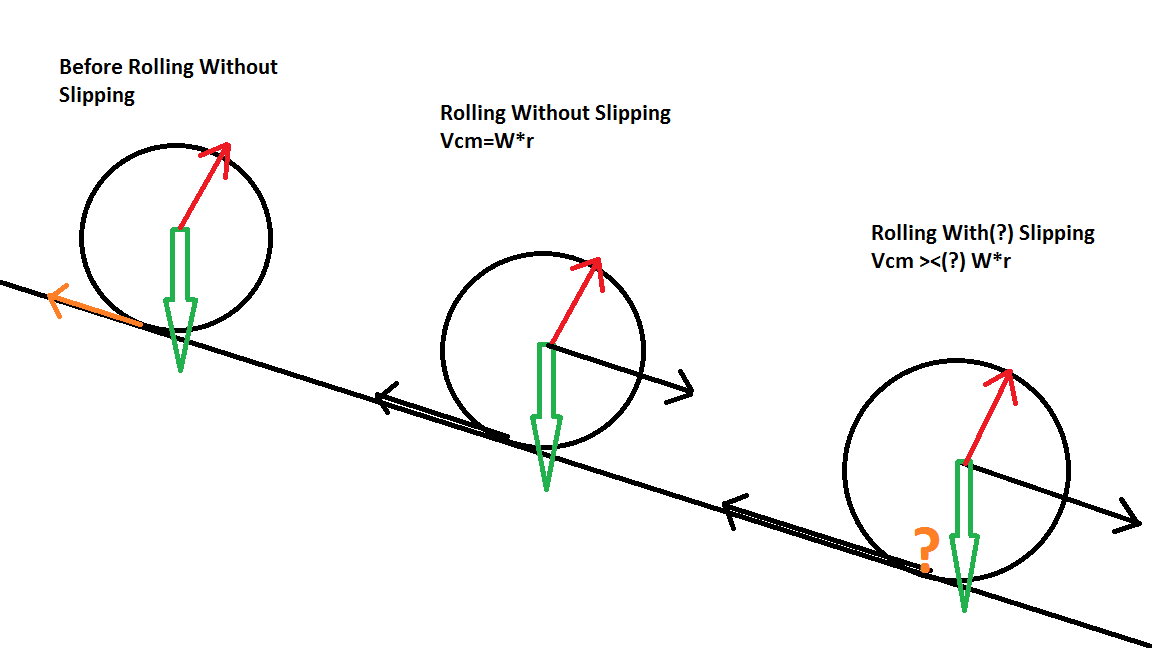 Again, the colored arrows are the forces while the black arrows are the velocities. My main, and third, question is what would happen after the cylinder starts rolling without slipping in this scenario; would it continue rolling without slipping, the angular velocity and velocity of the center of mass increasing by the same factor, or would one overtake the other? I predict that angular velocity should keep increasing, but that would mean that W*r>Vcm, resulting in a frictional force up the incline and a net torque clockwise relative to how it's viewed on the page. My attempts to show this mathematically has been difficult, so I would appreciate a mathematical explanation for this one.

My apologies for a long post; I just feel that I have a lot of gaps in my understanding here. Thanks in advance.

However, I find that the net torque of the cylinder is 0 if I set the axis of rotation as the bottom of the cylinder (the contact point between the ground and the cylinder); my first question is, what accounts for this discrepancy? I suspect there should be a force about the center of mass, but I don't see what could be the source of such force.

You're making an elemental error: the axis of rotation is through the CoG of the round object, not the contact point with the floor.

So your torque is the friction force times the radius of the round object, as explained in better detail below. This torque causes angular acceleration, assuming the object wasn't already rolling at $\omega={v}{r}$. If the object was rolling without slippage on a horizontal plane at constant speed and thus also constant angular speed then no friction is needed because there's no angular acceleration (or deceleration) and thus no torque needed.

I understand how the velocity at the contact point relative to the ground is zero. My second question is, would this mean that there is no friction force other than rolling friction, as I marked on the diagram? I suspect that there should be static friction force at the contact point, but that wouldn't make any sense because then the static friction would provide net torque, resulting in continual angular acceleration of the object.

Yes, it means there is only one type of friction in your idealised set up.

For the inclines, I've adapted one of your diagrams as follows: 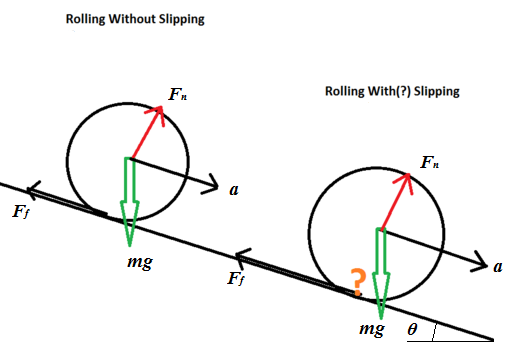 Let's look at the case without slippage first.

The weight of the rolling object $mg$ can be decomposed into two components, one parallel to the slope:

and one vertical to it:

The vertical (to the slope) component, also referred to as the normal force $F_n$ is the one that gives rise to a friction force $F_f$, usually somewhat simplistically modelled as:

with $\mu$ some friction coefficient. If $\mu$ is large enough there will be no slippage. When there is no slippage then the linear speed $v$ is given by:

The net force on the object in the $x$-direction (parallel to the slope) can now be used to set up a Newtonian equation of motion:

So with substitutions, the equation of motion is the following differential equation:

Integration between $0,0$ (for example but you can set your own initial conditions) and $t,v$ then gives:

In the case of no slippage, the velocity increase can also be determined from an energy balance. As the object rolls down the slope potential energy $U$ is converted to kinetic energy $K$, so that $\Delta U = \Delta K$. $K$ is made of two components, translational and rotational kinetic energy and we can write:

In the case where there was no slippage, $F_f$ provided a moment (torque) around the centre of the object and the equation of rotation is:

where $\dot{\omega}=\frac{d \omega}{dt}$ is the angular acceleration. With $F_f=0$, $\dot{\omega}=\frac{d \omega}{dt}=0$. In plain English this means that there is no angular acceleration and if the object wasn't rotating to begin with, it will not start to do so. In that case the motion is purely translational and there is no rotation.

It also means that when there's no friction the energy balance is reduced to:

and this means that a purely sliding object will gain more translational speed than a rotating one.

No, if it wasn't slipping to begin with it will never slip.

The equation of rotation for the round object on a slope is:

Now we can spot a snake in the grass: it appears that for large values of $\mu$, $\omega$ would also become large and this is not correct. This apparent error arises from the fact that $F_f$ is a reactive force that cannot become arbitrarily large.

Now assume again no slippage at all. We know from above that in that time $t$ the object has also acquired translational speed $v$:

What does this mean? In order to have no slippage at all we need:

Secondly, for the case where there is no friction at all:

In other words, it it was already rotating at $t=0$ it will keep rotating at that angular speed $\omega_0$. If it wasn't rotating it won't start doing so at any time.

Thirdly, for the intermediate case (some slippage}:

Well, that was a lot of algebra and some simple calculus, enjoy and I hope it helps!

Not the answer you're looking for? Browse other questions tagged kinematics velocity rotation or ask your own question.

2
If, for a body rolling on an incline, the friction coefficient isn't enough to allow pure rolling will it still roll?
1
Dynamic analysis of cylinder on top of moving plate
1
How is this seemingly counterintuitive result in a rotation problem explained?

1
Ideal Rolling Motion on Surface with Friction
3
How can angular velocity be constant even when there is a torque by friction?
2
Rolling without slipping taking the contact point as pivot
1
Rolling dynamics of round objects down an incline
1
Spinning ball gently lowered onto rough floor
2
Why are wheels made to carry more mass on the circumference?
2
Why do rotating bodies have friction between when the surface is accelerating?
1
Rolling motion, sliding, contact point, friction