Changing, or static, quark color composition within a proton?

Consider say the proton. It is seems to be universally stated that a proton is "composed of three quarks, 2 up and a down, and you must have the three different 'colors'".

So, you can have blue-up, red-up and green-down, or maybe green-up, red-up and blue-down, and so on. You need only glance at the wikipedia page for an example illustration of this.

Something I don't understand is, imagine "some particular" proton (say inside one particular hydrogen atom). Is is the case that

or, is it the case that

(B) .. that particular proton is continuously changing between the various possible combinations.

I generally understand the idea of color change - how gluons mediate the change of color between two quarks. This is explained widely for the general reader example, example.

However as I ask above, it is to me completely unclear whether that happens only occasionally (when?) or whether it is something that happens continuously (if so - exactly how often? 10 times a second? More, less?)

Furthermore. I was enjoying this excellent answer by John Rennie. The trouble is, that answer essentially says that the idea of a proton "being composed of three quarks" is in fact nonsense. Note too that this answer by another expert literally says ""red, blue or green" quarks do not exist".

What's the deal with this? For example, in particle accelerators, does one ever say "oh look ..... that proton there seemed to be a red-up, blue-up and green-down style of proton..". Or, in fact is this image: 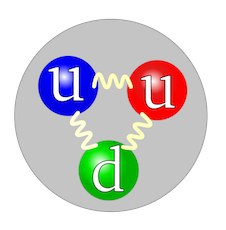 ... largely nonsense in terms of literally "what is a proton 'made' of"? Is it quite simply "utterly wrong" in any meaningful sense??

Again, even within that descriptive mode, which of "A" versus "B:" above is true??

Indeed protons and neutrons in the nucleus are very different than isolated. E.g. the neutron is assumed to be unstable isolated (~15mn lifetime) while they are say "stable" in the nucleus. But indeed in the nucleus protons and neutrons are quickly "blinking" all the time, exchanging genders as they exchange mesons (a pair quark-antiquark). So you might say that as a balance the nucleus is made of "such amount of protons and neutrons", plus at any time there do exist temporary grouping of 3 quarks (you can see the cross section then shooting high energy electrons). So there is "something", but not as material and stable we learn in young classes :-)

Not the answer you're looking for? Browse other questions tagged quarks confinement or ask your own question.

8
Is color charge a quantum mechanical observable?
0
What will happpen between a proton and an anti-neutron with unmatched color charges?

1
Relation between quarks and strings
3
Quark model in particle physics; is it possible for a particle to exist with five or seven quarks?
3
Up/Down Quark Color and Isospin
4
How are composite hadron fields related to elementary quark fields?
3
How are quarks assigned color charge?
0
Does quarks always pulls each other?
3
If quarks change colours constantly how are proton and neutron stable relatively?
6
Why are there no composite particles with fractional charges?