What are the conditions to observe gapless modes at the boundary for 1D case?

We observe gapless modes at the boundary for the case of SSH model or Polyacetylene The Hamiltonian for SSH model has particle hole and time reversal symmetries, it also has a Dirac like spectrum.

It seems that particle hole, time reversal symmetry and Dirac like spectrum is necessary to observe gapless modes at boundary for 1D insulator.

This is a very interesting point and it is somehow related to universality classes. A typical examples are the universality classes defined by time reversal symmetry. This is at the basis of Random Matrix Theory and has application for the analysis of the atomic emission spectra and in mesoscopic physics as well. There is a direct connection between the properties of time reversal symmetry and the properties of the SSH model as asked in the question. This is associated to the analysis of enlarging the universality classes from 3, as we have by considering only time-reversal symmetry, to 10. This can be done by considering other symmetry operators as particle-hole or mirror symmetry. This extension was carried on some year ago by Alexander Altland and Martin Zirnbauer Phys. Rev. B 55, 1142 (1997). This type of extended or non-standard classification was rediscovered in the framework of the analysis of topological systems. Most on the research work is due to Andreas Schnyder and collaborators, here some reference: Schnyder, A., Ryu, S., Furusaki, A. & Ludwig, A. "Classification of topological insulators and superconductors in three spatial dimensions. Phys Rev B 78, 195125 (2008) & Ryu, S., Schnyder, A. P., Furusaki, A. & Ludwig, A. W. W. Topological insulators and superconductors: tenfold way and dimensional hierarchy. New J Phys 12, 065010 (2010).

From the 10 fold classifications we can learn that the SSH model is the prototypical system for observing protected gapless model in 1D. Other 1D systems can also show gapless modes but these can lack of protection.

Note that a spectrum that is symmetric around zero energy is not necessary for the end states. The end states will just not lie at zero energy. In fact, the symmetric spectrum is artificial, since second-nearest hoppings introduce an asymmetry.

However, what is a real symmetry of the chain, is inversion symmetry about the centre of a bond and spinless time-reversal symmetry. Moreover, the "topology" of the SSH system is protected by these symmetries. In fact, it gives rise to a $\mathbb Z_2$ classification.

No change in the Hamiltonian that respects inversion symmetry $H(-k) = \sigma_x H(k) \sigma_x$ and spinless time-reversal symmetry $H(-k) = H(k)^*$ and does not close the energy gap can destroy the end modes in the topological regime ($t_2 \gg t_1$). Note that this forbids $\sigma_z$.

Recall the strong-coupling regime. In order to go from the trivial regime to the topological regime, you need to go through the point $t_1 = -t_2$ at which point the energy gap closes at $k=0$. So in order to change topology, the system has to become gapless. Near $k=0$, the Bloch Hamiltonian of the SSH model is given by the Dirac Hamiltonian: \begin{equation} h = m \sigma_x + t_2 k \rightarrow m(x) \sigma_x - it_2 \partial_x \sigma_y, \end{equation} where $m(x) = t_1(x) + t_2$. At the closing of the gap $m=0$. Now consider a domain wall between two different phases (see figure below). At a domain wall $m(x)$ changes sign. In this case, there exists a normalizable zero mode localized at the domain wall: \begin{equation} h \psi = 0 \Rightarrow \psi(x) = \exp \left( -\int_a^x dx' \frac{m(x')}{t_2} \right) \begin{pmatrix} 1 \\ 0 \end{pmatrix}, \end{equation} where the lower limit $a$ fixes the normalization. This is the Jackiw-Rebbi model. You see that the condition for a zero mode requires a change of the sign of the mass $m(x)$. This mechanism, called band inversion, is generic for all symmetry-protected topological states such as topological insulators, topological superconductors, crystalline topological insulators, $\ldots$. 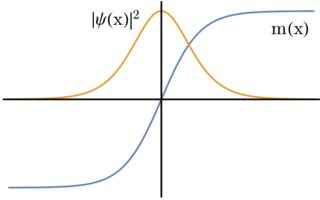 In essence, the symmetries were necessary to restrict $h$ to only two Pauli matrices. In order to have a generic gap closing in 1D you can only have two Pauli matrices. Any old symmetry that forbids one of the three Pauli matrices will do. If you allow for three Pauli matrices, you allow for two independent parameters apart from the momentum $k$ and any perturbation can prevent the gap from closing when going between the phases (which means no zero mode). To see this, note that for two parameters you can make a detour away from the gap closing point. This is basically the Neumann-Wigner theorem.

Not the answer you're looking for? Browse other questions tagged condensed-matter topological-insulators topological-phase or ask your own question.

12
Is edge state of topological insulator really robust？
4
Ground state of AKLT chain invariant under time-reversal?
8
Why do we use the anticommutation relation for particle-hole and chiral symmetries?
0
Time reversal, particle-hole and chiral symmetry
6
$\mathbb Z_2$ or $\mathbb Z$ invariant for the Su-Schrieffer-Heeger (SSH) model
0
Meaning of complex pairing terms in Kitaev chain