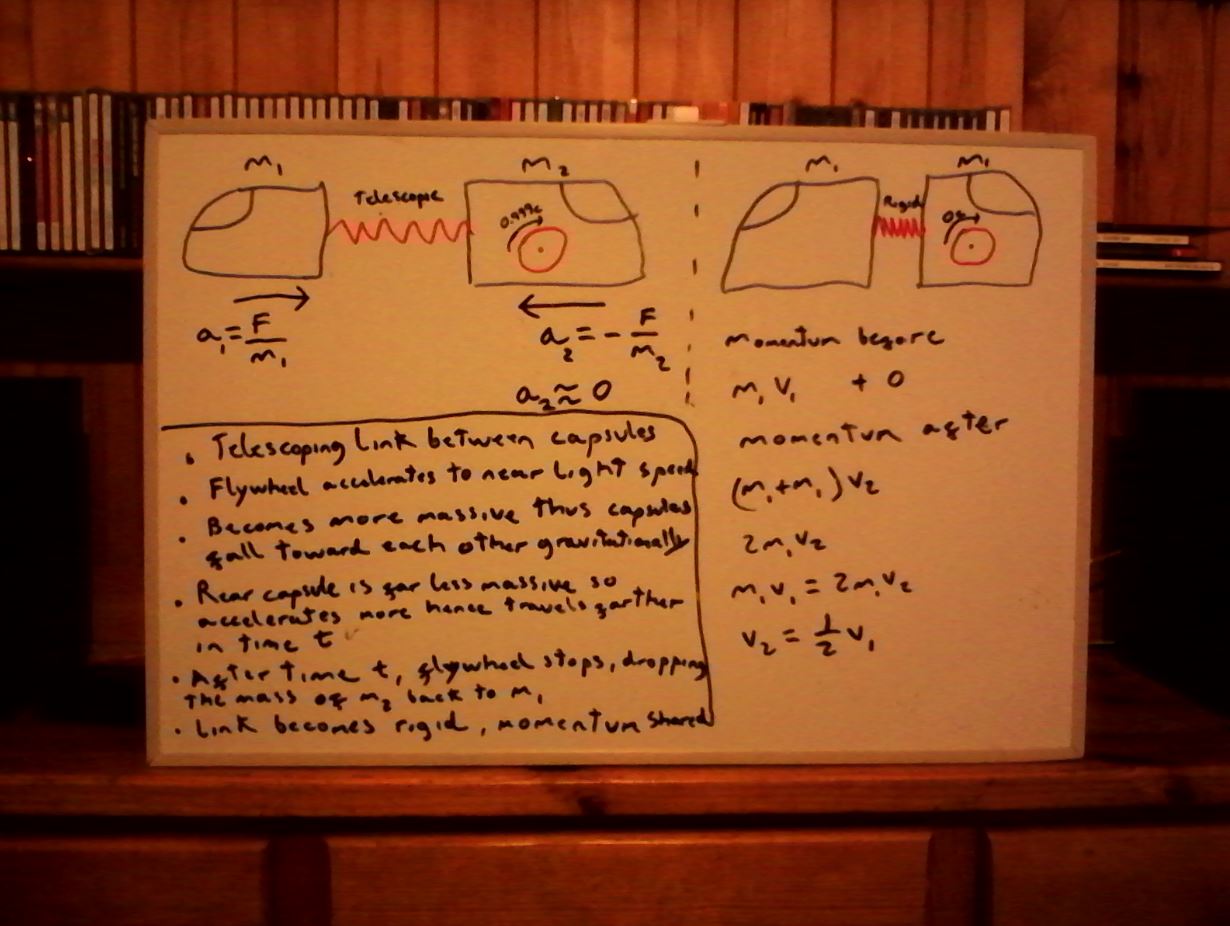 Why wouldn't this "warp-drive" work? Assuming we can build a flywheel that can survive near light speed and have an onboard power storage or beamed energy that can spin it up to that speed and back down again

1) Telescoping link between two capsules, they are free to move towards each other

2) flywheel in first capsule starts spinning. As it nears light speed from what I've heard about relativity it will start getting more massive instead of actually getting any faster

3) This extra mass will give it a stronger gravitational field right?

4) Both capsules now fall towards each other in accord with Newton's law of gravitation, however because the front capsule is now so much more massive it doesn't move noticeably as opposed to the rear capsule which basically blasts off towards the front capsule

5) After time, t the flywheel slows down, the masses of the two capsules becomes equal again, however the rear capsule stays in constant motion toward the front capsule because of Newton's first law

Thoughts? I say it's a warp drive because using the visualization of spacetime where it is a flat elastic sheet, the flywheel dents the sheet which sucks in the rear capsule but just before it gets there the dent disappears but then reappears later further down the line to repeat the process.

A higher speed does not equal a higher mass. This is something commonly taught to beginning students of relativity as an explanation of relativistic momentum because it is easy to understand (but does lead to misconceptions).

Also, momentum must be transferred to slow down the flywheel.

Not the answer you're looking for? Browse other questions tagged general-relativity special-relativity gravity spacetime warp-drives or ask your own question.

1
Is light affected by gravity? Why?

9
warp drive with gravitational waves in the nonlinear regime
6
Harold White's work on the Alcubierre warp drive
33
How does “warp drive” not violate Special Relativity causality constraints?
1
How does the Alcubierre drive warp space in the vicinity of it's destination?
3
Derivation for Alcubierre Drive
2
Alcubierre-White warp drive energy consumption
0
Minimum Amount of Negative Energy required in Warp Drive Spacetimes