I had a confusion in the diffraction experiment about which I was taught in school.

According to the formula we Derived The width of the central maxima decreases on decreasing width of slit and vice versa.

But what i wonder is what happens to the max intensity of central maxima in these cases? I asked two physics teachers and they gave me opposite answers-one said it increases on decreasing slit width which i feel is right but the other said it would be the same as light is of constant wavelength(monochromatic).

What do you think? Please explain:)

I did a quick calculation of the single-slit diffraction patterns for three different slit widths of 100, 60, and 40 microns. Wavelength was that of green light (about 5000 Angstroms). Intensity plot is shown below for a progression of decreasing slit widths from 100 microns width (blue curve), to 60 microns width (green curve), and then to 40 microns width (red curve): 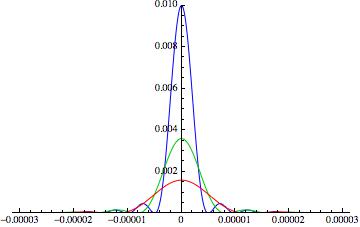 On axis or central lobe field increases with the area of the slit (and thus the intensity $I\propto area^2$).

If you have a monochromatic plane wave traveling along the $z$ axis incident on a diffraction slit of width $w$ (as shown in the image below), then the initial field is $E(r,t) = E_0 e^{ik_0 z- \omega t}$. Now immediately after the slit (assumed to be at $z=0$) the field is (ignoring the temporal component since this is a monochromatic wave) $$E(r) = E_0\operatorname{rect}(x/w),$$ where $\operatorname{rect}$ is the rectangle function (equal to one if $|x/w|<1/2$ and zero outside this range). 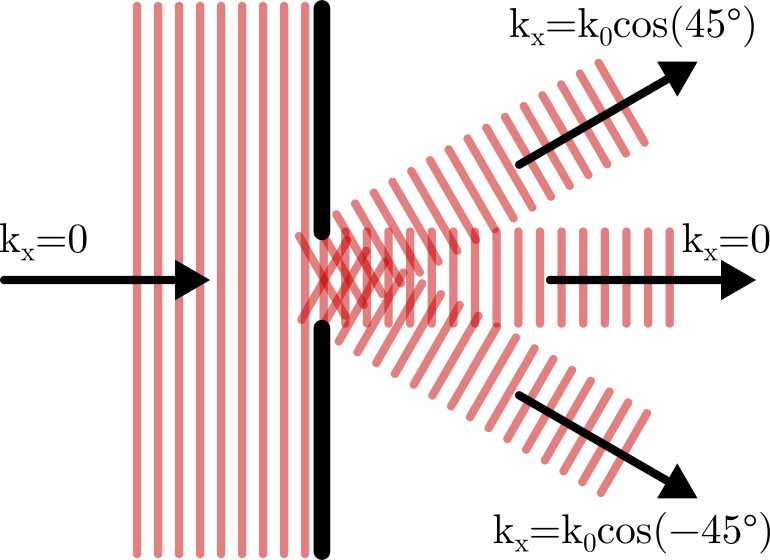 Not the answer you're looking for? Browse other questions tagged visible-light double-slit-experiment diffraction or ask your own question.

4
Young's double slit experiment viva question
4
Why are there interference patterns inside a diffraction envelope?
3
What is the intuitive reasoning behind a factor of 4 in the Fraunhofer double-slit intensity equation?
0
A confusion regarding the single slit interference
0
How does the intensity not change when the width of the slit changes in single slit diffraction