What could break up a neutron star?

Beside the obvious answer black hole, is there anything else? Could a nearby supernova blow it away/apart? Or any sort of (theoretically intense enough) field? I guess an electric field is out of the question no matter how strong.

Sorry if this a lazy/amateurish question, but I'd probably have to study degenerate matter a lot before I can answer this myself comprehensively. I suppose the question asking What is the binding energy of a neutron star? is related, but I don't know how to interpret it myself in layman's terms.

Do you mean anything in the real universe or just theoretically? If the latter, then I can think of a few phenomena:

In all these cases, I'm not sure how the nuclear Strong Force might modify the calculations (it might not be only gravity holding the neutrons down).

To expand on those answers, I did a few BoE calculations assuming only gravity, to see what kind of values we'd need for each of these cases. We start with a typical neutron star:

I'm going to add another way to break up a neutron star. Shoot antimatter at it.

The difficulty with breaking up a neutron stars is that, once they undergo the compression to become Neutron stars, their gravitation tends to keep them there. The minimum size for a Neutron star to form is about 1.2-1.5 solar masses, but once it's shrunk down, the mass it needs to maintain the Neutron compression is a lot less than that, perhaps around 0.1 solar masses. See here for much more detailed answer on minimum Neutron star size.

The outside of a Neutron star is highly compact heavy ions and flowing electrons. 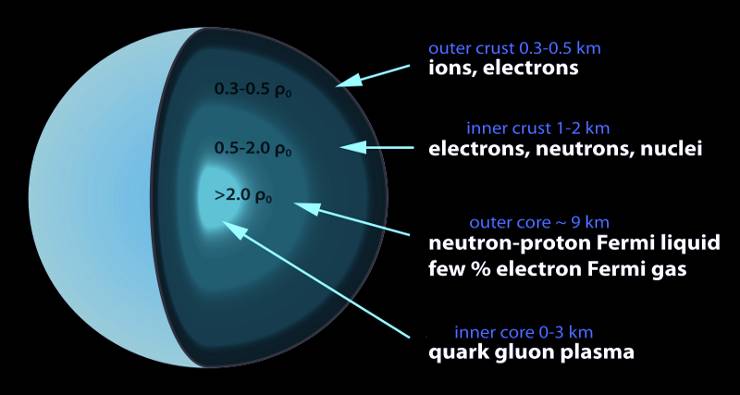 So, if we shoot it with positrons, the positron hits an Electron and evaporates into gamma rays and you're left with a positively charged Neutron star, shoot it enough and the positive charges will gradually build a force that resists the gravity (granted, it also becomes more resistant to continued firing of Positrons), but if you manage to shoot it enough times and you might just be able to cause the Neutron star to expand and overcome the gravitational force that keeps it in it's Neutron state.

Now, maybe you'd need to hit it with anti protons / anti neutrons to reduce more mass as positrons alone might not get the job done, but I like the positron idea cause it preserves the baryonic matter and if you get the Neutron star to expand and when that happens, the Neutrons begin to decay into protons, so you're left with basically a hydrogen star. Granted one with an unnaturally high positive charge.

The neutron star is still "regular enough mater" for that it would react to anything a normal object would react.

To me the point is more "since its center is not far to collapsing to blackhole, is it possible to shake (or breakup) a neutron star without making it collapse".

The only likely mechanism by which a neutron star can break up is through a collision with another neutron star, in particular in binary neutron star mergers.

Not the answer you're looking for? Browse other questions tagged astrophysics neutron-stars supernova or ask your own question.