Most explanations I have found say so much. My question is, is it certain that the inner electron is ejected completely out of the atom, and not to another vacant, higher energy level? In calculation of characteristic K$_\alpha$ ray frequencies for instance, I have always taken the difference of the energies of an ionised atom in the two states when an electron is lost from a K shell, and when it is lost from the L shell of that atom. The only difference, of course, in the situation I propose is where the excited electron finally ends up - whether it becomes free of the atom, or makes a transition to a higher energy level. Will the prediction of characteristic X-ray frequencies differ if the electron is assumed to be excited to a higher level - or is the difference too minimal to matter (the energy difference between the K and L shell energy levels for an electron is hardly affected by outer electrons anyway)? And does that electron, in reality, actually become free of the atom, or can it also move to a higher level energy state?

Regarding the core question,

is it certain that the inner electron is ejected completely out of the atom, and not to another vacant, higher energy level?

this is the most likely scenario but it is not completely necessary. It is perfectly possible (at least in the sense that it's not forbidden) for the electronic collision to leave the atom in an excited state with a core hole and that electron occupying some valence or Rydberg orbital, and for that state to decay radiatively to the ground state of the neutral atom, or indeed to some slightly excited state that then decays by emitting a visible or IR photon.

If that is the case, then the frequency of the emitted photon will be slightly below the shell edge. This is good and bad: on one side, the core-valence energy difference tends to be big enough that the effect of where the original electron ends up will be minimal, but on the other side, any emission below the edge will stick out like a sore thumb.

However, I suspect that the probability of this process is essentially negligible, because it's competing with the Auger effect, in which the valence electron drops back into the core hole and uses the energy to ionize another electron from the valence band, with a very fast timescale.

It is hard to make general statements because there is a wide variety of possible situations covered by the question, but my impression is that pre-edge peaks tend to be somewhere between negligible and weak, though they can be observed if your apparatus is sensitive enough: 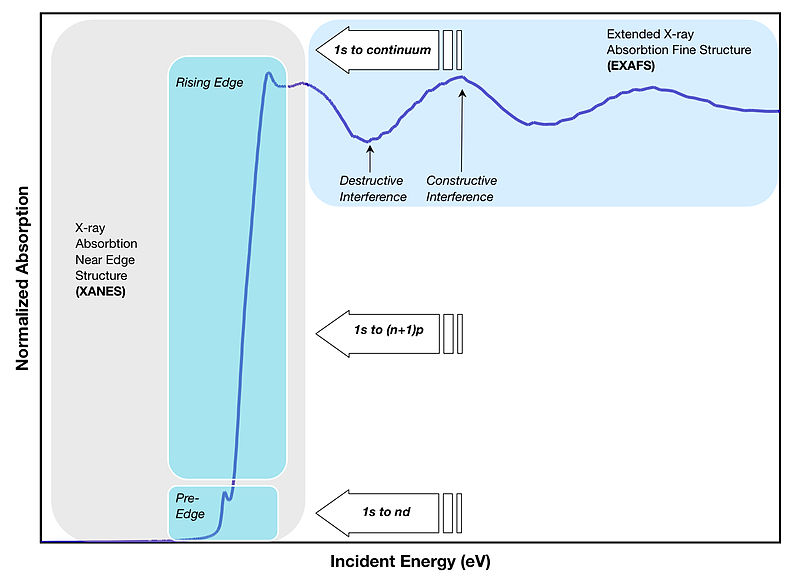 Not the answer you're looking for? Browse other questions tagged electromagnetic-radiation atomic-physics x-rays or ask your own question.