How does this incorrect model of a wire give the correct result for B-field produced?

They then proceed to deduce, through standard Lorentz contraction rules, that a particle of charge $q$ moving some distance $s$ away from the axis of the wire with velocity $u$ along the direction of the current (to the left) will experience a force

This is the correct formula one would get from assuming the presence of a B-field in the stationary frame, but what I don't understand is how this was correctly deduced when the model was incorrect. In reality, positive ions are stationary inside a conductor, and only electrons drift along the wire (to the right). Thus, the current is only constituted by electrons/negative-charge. When I do the calculation under that assumption/model, both the positive and negative linear charge-densities still change, but by different factors, leading to a different final expression. Is there something wrong with my concern?

Here is an illustration of the model I have posed. 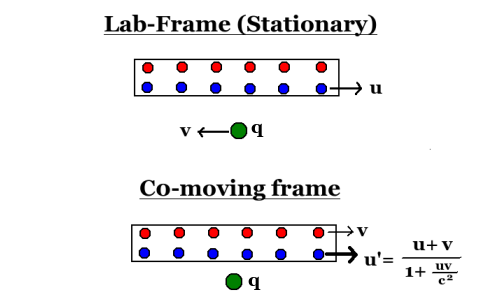 On the other hand, the linear charge-density for the positive ions will increase by a factor of,

Thus, the total linear charge-density in the co-moving frame $\lambda_{tot}$ is,

Thus, in the stationary frame, we can translate this as the wire producing a clockwise magnetic field (axis aligned with current - anti-aligned with electron flow), acting on a test charge travelling in the direction of the current a distance $s$ away from the axis of the wire, being influenced by a force given by $F_{stationary}=q\mathbf{v}\times\mathbf{B}$.

Current is current and generates magnetic fields. And you feel a force from the magnetic field in a way that doesn't depend on what made the field.

A simpler way to correctly compute the charge densities would be to literally make a segment one meter on length and count the number of charged objects in it and then multiply by the charge of each object.

Mathematically, a positive current traveling to the left is the same thing as a negative current traveling to the right (this is an important concept to think about). This is because electric current is really a current of moving charges, not necessarily electrons. It just so happened that we decided that the particles actually doing the moving are "negative." So we call a current negative merely by convention.

Think of it this way: if I have an electrically neutral conductor, and all of the electrons flow to one end, what charge is the other side? It will be positive, because that is what is left after all of the electrons have left that side. If you consider this from a different perspective, saying that a negative current went to the one side gives you the same result as saying that a positive current moved the other way. Because in either viewpoint, one side gets a net charge and the other gets the opposite. This logic applies to any moving current and it is sometimes helpful to consider when looking at certain types of circuits.

Not the answer you're looking for? Browse other questions tagged electromagnetism special-relativity magnetic-fields or ask your own question.