This is a question I found in Mechanics for Engineers by Beer & Johnston.

A 600-lb crate is supported by the rope and pulley arrangement as shown below. 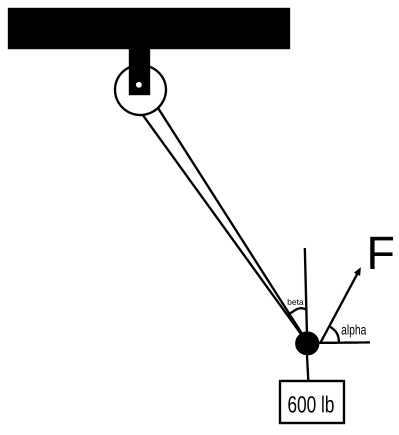 Write a computer program which can be used to determine, for a given value of $\beta$, the magnitude and direction of the force $F$ which should be exerted on the free end of the rope. Use this program to calculate $F$ and $\alpha$ for values of $\beta$ from 0 degrees to 30 degrees at 5 degree intervals.

For writing the program, I need to obtain a relation between $F$, $\beta$ and $\alpha$. The only thing which I was able to think of was that the component $Fcos\alpha=600 lb$ I tried to relate the angles $\alpha$ and $\beta$ by using high school geometry but I did not obtain any result which I could use.

Can anyone help me with the physics part of the question?

While this isn't enough to solve it, Lami's theorem is a useful trick for your toolbox. 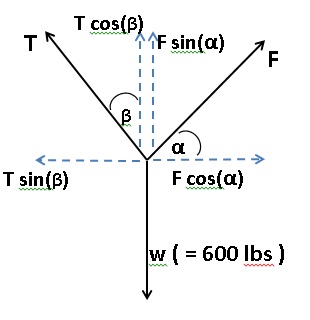 The first step in any mechanics problem is to draw a free body diagram. Here is a free body diagram of the problem showing all of the forces on the 600 lbs weight, which we idealize as a point. It shows the force, F, the angles α and β, the tension, T, on the rope, and the weight, w = 600lbs. We then break F and T into vertical and horizontal components. Since the problem says the weight "is supported by the rope and pulley" we assume everything is in equilibrium, which tells us that the sum of all forces is zero. We can break this down to say that the sum of the vertical components of the forces is zero, and the sum of the horizontal components is zero. Therfore, from the vertical components we get:

From the horizontal components we get:

BOTH of these equations must be true at equilibrium. I think this should be enough to get you started on your program. HTH.

By the way, someone (ja72) mentioned above that there are two equations and three unknowns. Unless I'm missing something, I agree. You cannot calculate F and α for various values of β without some other assumption, either about the relationship between α and β (for example we could assume they are symmetrical so β = (π/2) - α ), or about the value of T. Note that if we do assume the are symmetrical, then T = F.

I can't really understand how the T works as a pulley, but I can give you a general idea.

Using vectors will simplify it a lot.

Not the answer you're looking for? Browse other questions tagged homework-and-exercises newtonian-mechanics forces vectors or ask your own question.

2
Vertical and horizontal components of forces and vectors
1
Problem with formula for parabolic motus
1
Interaction between an ideal pulley and an ideal rope
2
Are forces vectors?
4
How to obtain $Y$ rotation with only $X$ and $Z$ rotation gates on the Bloch sphere?
0
Finding one-loop box Feynman integral solution