Why the current is the same at all of the positions in a series circuit?

Why the current is the same at all of the positions in a series circuit? although there are different voltages at different positions of the circuit. What i know is that as the electron passes one resistor, the force of attraction from the negative terminal is less. Doesn't this affect the current?

When the system reaches steady-state condition(things do not change with respect to time), then we have the same electric field inside the circuit. Before reaching the steady-state condition, then yes, the forces exerted on the electrons(or voltage difference between some points) is not the same at every point in the circuit. But, as Griffiths puts it in his famous book("Introduction to Electrodynamics"), it has a tendency to auto-correct the path of the electrons, so as to make them move with constant velocity(and thus current) and make them follow the path of the circuit(haven't you even thought of "how do they follow the bending path of the circuit"?). Why this happens though? When they find a resistance, at non steady state, they accumulate at the resistance but then, that accumulation means that an electric fields builds up at the "point" of that accumulation, and that pushes with stronger force the next electrons that come to the resistor and makes them pass through it with a velocity that keeps getting bigger and bigger with time until it reaches at the point in time that nothing changes with time(steady state) and the final velocity of the electrons passing through the resistor gives a current equal to that at every other part of the circuit. The same goes for following the curves. The charges that first find the bending path, hit on the path and accumulate there. Electric field gets more intense there and thus tends to push the next incoming electrons in a way to make the follow the path.
The following image is from Griffiths' book and it is about the bending of electrons in order to follow the path. This will help you also understand the situation at the resistor(I INCLUDED THE FULL DISCSSION OF GRIFFITHS WHICH INCLUDES SOME MORE ADVANCED CONTENTS,IF YOU DON'T CARE ABOUT THEM, JUST SKIP THEM): 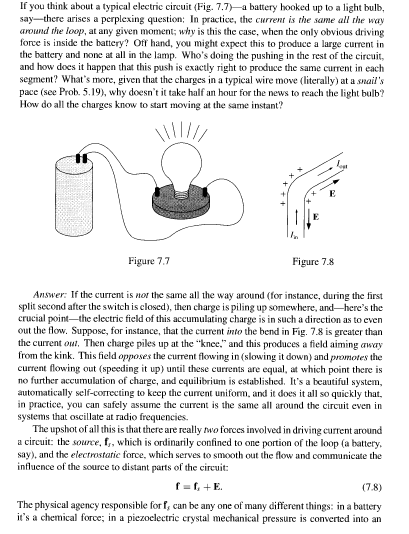 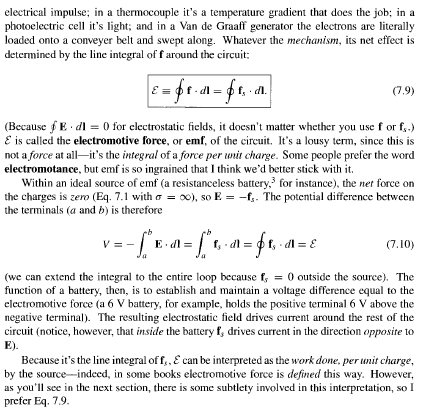 The current is the amount of electrons passing through a point in the circuit per time. If no electrons are added or removed in the circuit, this number stays constant. Think of it like water flowing through a series of pipes. The pressure can change, the diameter of the pipes and the flow velocity can change, but the amount of water flowing into one side is the same amount that comes out on the other side.

Because no charge is accumulated at any point anywhere when you have a steady current!

If a part of the pipe is more narrow, then this causes "resistance" against the water flow. But of the above reason, we still need inflow to equal outflow. So for a much narrower part, the water simply has to speed up. And that is achieved by having a bigger pressure difference.

So, if a steady current flows then that is proof that there is no accumulation of charge anywhere. And in a series circuit where there are no branches for the charge to go instead, if the path is blocked, there MUST be the same inflow as outflow of charge to every single point in the circuit - therefore, equal current at every single point.

This is Kirchoff's current law.

If there is a resistor on the circuit path, then the current is resisted, which simply means that a higher "pressure" difference (higher voltage) must be applied to still push the same amount of charge through every second.

Not the answer you're looking for? Browse other questions tagged electric-circuits electric-current electrical-resistance voltage or ask your own question.