How is the motion of electron in p orbital?

The lobes are regions where you have a non-zero probability of finding an electron. These regions have varying shapes for different types of orbitals. It wouldn't make sense to think that orbitals are actually paths of some sort, where electrons whizz around. You'll know this is wrong if you try to understand the uncertainty principle.

The uncertainty principle prevents us from simultaneously measuring the momentum and position of an electron, up to sufficient accuracy.

Also, read: What is the uncertainty principle?

As usual, you can re-express the wave-function in momentum space (it's just a Fourier transform away from the spacial wave-function for bound state which is really nice). But that does not tell you how the electron moves anymore than the spacial wave function tells you where it is. Instead, it tells you the probability distribution function for results of measuring the electron's momentum just as the position wave-function gives you the PDF for position measurements.

I'm not an expert in those measurements, but I've found a reference in which the momentum-state of electrons in xenon atoms was measured so sufficient precision to show clear relativistic effects (PDF link) (J.P.D.Cook, J.Mitroy, and E.Weigold, PRL. vol 52. no 13. p1116 1984).

In addition to these two excellent answers I'd like to point out that the deceptively smooth surfaces of orbital graphical representations found in text books and web pages, like this excellent rendition of a 2p orbital, below are surfaces where the electron probability density is the same. In no way do they represent paths or 'orbits'. 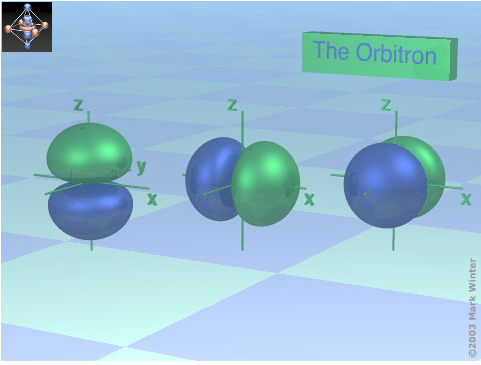 Not the answer you're looking for? Browse other questions tagged atomic-physics heisenberg-uncertainty-principle or ask your own question.

5
What is the uncertainty principle?