If the Moon had a large piece blown out would it remain tidally locked?

Here is a picture of the Moon in the game just after it's been blown up. 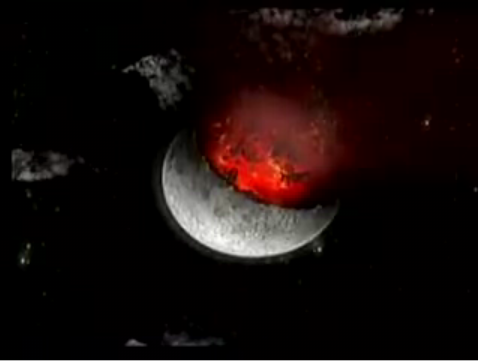 Ignoring the difficulty with blowing a sizable piece of the moon off, there's 2 primary factors to consider. Distance and angular momentum.

The moon actually rotates. All tidally locked objects rotate, they just rotate, they just rotate in sync with their orbit. The Moon rotates once every 28 days, the same as it's orbital period. If the chunk is blown away from the Moon and Earth, and every action having an equal but opposite reaction, the Moon should get blown closer to earth, and if the angular velocity doesn't change, then the Moon will continue to rotate once every 28 days but being closer to the Earth, it will now orbit in less than 28 days and it would demonstrate a slow rotation, which, over time, maybe ten of million years or so, would gradually return to being tidally locked due to the Earth's tidal forces.

Angular Momentum between the remaining Moon, the piece blown away and the explosion needs to remain constant. If the piece is blown off at an angle, that could significantly change the remaining Moon's angular velocity. The piece would in effect, carry a bunch of angular momentum with it and the remaining moon would need the same amount of angular momentum subtracted from (or added to) it's Angular Momentum, as it could be done in either direction. Hence, the explosion could not only blow off a chunk of the moon but cause the remaining moon to spin. Explosions tend to be mostly uniform, so a significant change in rate of rotation would probably need a specific set-up if you wanted to get the moon spinning quickly.

If this chunk was blown off by a large meteor impact, that kind of impact could certainly send the Moon spinning.

Not the answer you're looking for? Browse other questions tagged homework-and-exercises newtonian-mechanics newtonian-gravity estimation tidal-effect or ask your own question.

0
Does the Moon have rotation about its axis?
3
What exactly will happen if a small planet collides with Earth?
2
Which force transfers angular momentum in tidal locking?
1
If it was possible to attach a carbon nanotube rope between the Earth and the Moon, how could it be used to collect energy?
0
Would a space elevator theoretically be possible on a tidally-locked planet?
5
Orbital pendulum (librating moon dumbell model)
5
Will extracting power from ocean tides affect the moon's orbit in the LONG run?
2
Can a satellite have one axis horizontal to its host, and spin about that axis?