Perception of Depths and Stereovision [closed]

I watched a video on Youtube and read a few articles which say that human beings see 3D because we have two eyes. But does that mean when I close one of my eyes, I should see 2D? It doesn't happen so. Why am i still able to be understand depth? Would a person with one eye not be able to perceive depths?

You can't understand depth as well with one eyed sight. But the "photogrammetry" (the process of inferring depth from images) done by our minds only partly depends on stereopsis (depth inference from images on taken at slightly different positions / in planes at slight angles). The mind subconsciously brings to bear all kinds of heuristics and rules it has learnt when processing images. For example, we know from experience roughly how big certain objects are: if we see a car in the distance, the mind knows that it is roughly 2 meters wide and four to five meters in length; an inference of distance to the object is clearly made from this information. The very fact that our minds do this and we can be consciously aware of these calculations if prompted in the right way is the reason behind the humor of this classic Gary Larson cartoon: 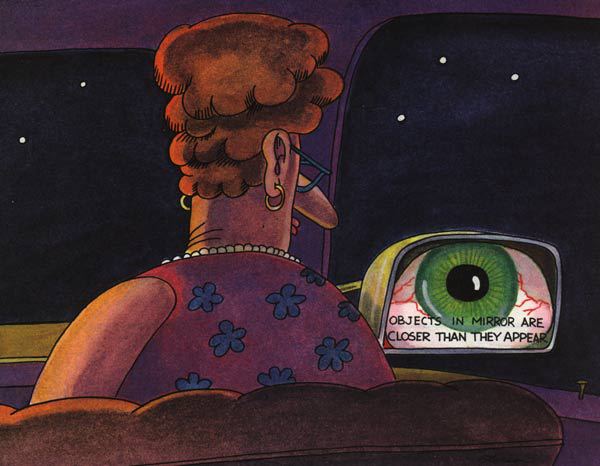 On the African Savannahs where we evolved our sight, there are many "standard" lengths the mind can use like this to infer distance: trees and plants, well kenned landmarks and so on. Indeed just as the parallax method of measuring distances to stars (measuring of the angle subtended by 1AU through images taken six months apart) becomes less accurate with distance, gives out at about 300 light years distance and must be replaced by standard candles / redshift measurements, so too does our mind gives less weight to subconscious stereoscopic calculations and more weight to heuristics like the above. It would be an interesting psychological experiment to test the accuracy of depth perception of one eyed versus two eyed sight with distance: the advantage of two eyes over one would lessen with distance. I'm sure something like this has been done, but cannot find references to it right now.

There are multiple clues to perceive 3D:

So, it's all depend what you call see in "3D" (stereovision ?) and "see" (direct perception or using some cognition ?).

The question you are asking is something that engineers of Virtual Reality (VR) companies have had to ask themselves many a time, and there are weird effects, like a gender dependence, on how we perceive in 3D. There are actually a large number of factors that effect how we perceive colors.

WetSavnnaAnimal already meantioned stereopsis, or 2 eyes effect due to the parallax. He also mentioned a sort of standard candle approach we observe often in astronomy, but applied biologically. This is called motion parallax. Another major effect is shape-from-shading, in which you will noticed as you change your view of an object the shading(light scattered or reflected) alters, and your eyes will actually flicker constantly in efforts to recalculate the tiny shifting in luminosity.

What the heck does this have to do with Gender?

It turns out that the eyes are the 2nd most sex-hormone rich region of the body, behind your junk in the trunk. It turns out there is a strong correlation between testorone and androgen loaded lads having their dominant visual cue be motion parallax while the lasses seem to favor shape shading. Research even shows that people undergoing male to female hormone therapy as part of a sex conversion therapy will actually show an increased likelihood of simulator sickness in VR setups. This is because most VR technology relies on motion parallax to achieve the "3D" look.

Why aren't folks at Occulus and other VR companies fixing this?

They likely are trying to, but if you are familiar with how modern graphics cards work you could realize how this is actually a major computational hurdle. It turns out that shader operations are far more computationally expensive than the relatively small angle transformations you generally need to apply for a parallax effect, and (this is mild speculation) I believe the computational load scales far less favorably with shaders.

It's not really due to the fact that we have two eyes but that to detect parallax there needs to be a sufficient amount of separation between points in the visually receptive area.

If we were, instead of human beings with two eyes, something similar to cyclops which had just one eye; then one might suppose that with a large enough eye - that is stretching from where one eye is to the other, then this too would allow us to see depth.

It's easy to see why this particular solution wasn't adopted by evolutionary pressure: it's simply far too unprotected.

Stereo vision is just one (though powerful) source of depth information.

Eye focus and microsaccades still give one-eyed people some depth perception and combined with pure reasoning/inference from 'known' objects allows to approximate distance.

A species with a single eye could be expected to augment those features for better depth perception from a single 'sensor', e.g. rapid and exact refocusing can be used by cameras for measuring distance, and an appropriately evolved eye could do it better than humans can.

Not the answer you're looking for? Browse other questions tagged spacetime-dimensions vision perception or ask your own question.

1
How is depth perception linked with the separation between our eyes?
4
As 3-dimensional beings, do we really have 3-dimensional vision?
1
If we had three eyes, would our visual perspective be fourth dimensional?
0
Why do we (3 dimensional creatures) see in 2 spatial dimensions?

161
Could Legolas actually see that far?
29
Can a human size object move so fast that it ceases to be observable?
1
How does the Sun burn a crescent shaped scar in your eyes during a solar eclipse?
1
Understanding the color of fluorescent and non-fluorescent objects
1
Am I right about IR vision?
1
Extra Dimensions (in String Theory) - What does it mean?
1
Human colour perception – summary needed