I'm trying to understand light sheets as related to the holographic entropy bound for information. This bound equates the information on a surface (e.g. the event horizon of a black hole) with the information that can be stored in a volume (holographic principle).

I have looked at a lot of diagrams but I still don't quite understand geometrically what a light sheet actually is and how they are defined. (Presumably it defines a space-time volume?)

Can someone please provide a clear definition of a light sheet, and its relation to the holographic surface?

In addition, what's the intuition that the information on the light sheet is related to the surface in question?

I take it that your question is about Bousso's covariant holographic entropy bound. To arrive at a (rather hand-waving) visualization of this bound we imagine a universe with only two spatial dimensions. Taking a snapshot of this universe can be represented schematically in the following diagram representing the 2+1 dimensional spacetime. 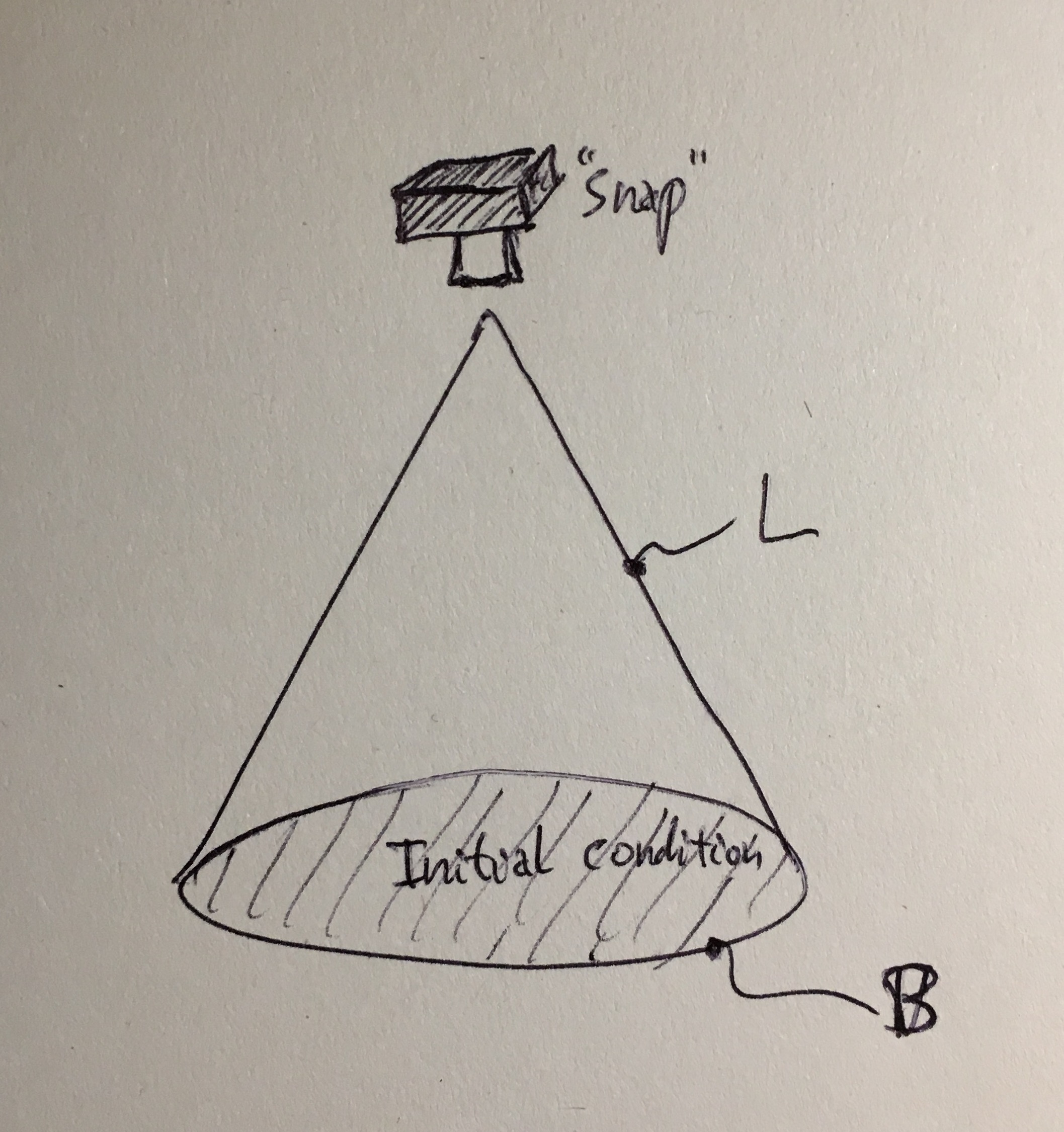 The photons reaching the (omnidirectional) camera at the moment of the snapshot trace out a light cone $L$. This light cone terminates at some boundary $B$ which defines 'how far back in time' your snapshot reaches. The scene captured by the picture constitutes all visible events on this light cone. These events can all be traced back to an initial volume (shaded region). The boundary to this initial volume coincides with the light cone's termination boundary $B$.

We can now ask the question: "At the most fundamental (Planck-scale) level, how many different scenes are possible on the light cone $L$?"

One would expect the number of degrees of freedom to scale proportional to the volume $V(L)$ of the light sheet $L$, and therefore the number of distinct scenes to scale exponentially with $V(L)$. Here, $V(L)$ is to be measured in Planck volumes.

According to the holographic principle, this represents a gross overestimate of the possible number of states. Rather, the number of fundamental degrees of freedom scales with the size of the boundary $B$ measured in Planck areas, and hence the number of states scales exponentially with $V(B)$.

The above simple picture does not include the effects of gravity. Gravity will morph the light cone $L$ and Bousso argues that the relevant termination of the light cone is at the point where the associated boundary $B$ is largest.

Setting aside where exactly one terminates the light cone, in essence the covariant holographic principle states that each possible state on the light cone can be mapped 1:1 onto states on the terminating boundary of this light cone.

Not the answer you're looking for? Browse other questions tagged black-holes entropy holographic-principle or ask your own question.

3
How does the holographic principle apply to the $n$ dimensional space of String Theory?
4
More (Dense) Information in Bulk than on Surface?
5
Connection between Different Kinds of Entropy (Boltzmann, Volume, and Surface Entropies)
2
Are there other types or versions of holographic principle?
1
What does the concept of "Entropy Flow" mean in detail?