I am designing an electromagnet which will be used to test magnetic sensors. So I used to formula found at hyperphysics which relates the magnetic field flux density to the number of turns, the current and the material permeability.

However after buying a 10cm length of rod of Fe55Ni45 (which has a magnetic permeability of at least 6000) the results are disappointing.

I wound 36 turns around the core and put 200 milli-Amps through the windings. However with my calibrated Gauss meter I can only see that the electromagnet is producing around 5mT. This is much lower than the expected value!

This is below the stated saturation value of the material (1.6 Tesla).

Thanks for any answers... 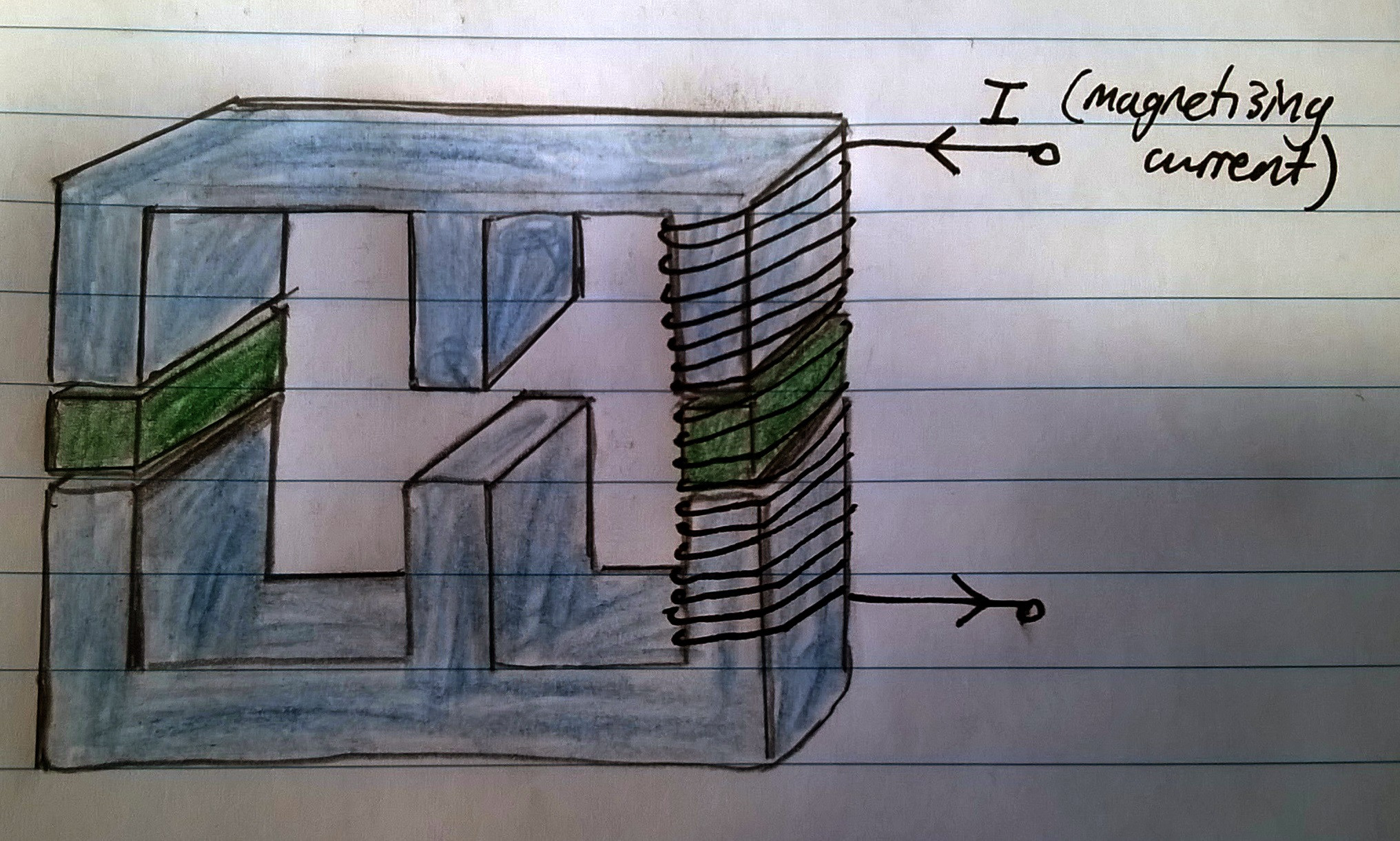 I will let someone else walk you trough the math of the problem and will give a few experimental pointers on what the solution looks like.

If you want to generate strong fields with an electromagnet, then you need a closed magnetic path which is only disrupted in the volume where you want to access the field. This is what a typical laboratory electromagnet design looks like: http://appliedmagnetics.com/electromagnets.html . The closed magnetic path can not be "replaced" by using a (basically unsuitable) magnetic material with large permeability. OTOH, if you don't care much about the quality of the field and it doesn't have to be variable, I would strongly recommend to use permanent magnets.

The easiest way to build an electromagnet that actually works is probably by taking one or two large power transformers with E-core (they look like this http://k5rmg.com/old-web/Pages/Tech%20Articles/Article%20Images/Jan,%20E-I_core.gif) apart and to use the existing low voltage windings for excitation. Get yourself a transformer where the laminate isn't welded together, otherwise you are in for some nasty machining. The air gap can be easily created by putting a few laminate sheets into the outer legs of the E-core, leaving the gap in the center for your experiment volume.

You will also need a power supply that can handle the inductive load, a lead acid battery is probably best (as you will need several A of current). Electronic supplies will likely die the first time you turn the current off because these transformers do store quite a bit of energy when current is flowing trough them, all of which will be dumped right back into the power supply as a nasty inductive high voltage spike when the supply is being turned off. At the very least you will need protection diodes that can take care of a few hundred Ampere peak current while absorbing the energy.

The formula on hyper-physics is indeed an approximation for near the center of a long solenoid. It's going to be significantly less (although a factor of 100 sounds a bit extreme...) near the edges, and if your piece of iron isn't thin the "long" solenoid approximation isn't going to be any good either. Also, if the solenoid is small then your tesla-meter might be averaging over some small area (where the peak would be closest to the center of the axis and closest to the surface of the iron), reducing the overall field observed by the device.

0.5 Tesla is a large magnetic field; you are going to need a lot of current (or a lot of loops) if you want to get that high. A typical configuration for generating near-constant magnetic fields is using a "Helmholtz Coil" configuration; you might find this type convenient. Another common configuration is using a "C" shape with a gap, kinda like the picture below (with coils wrapped around the C shape there)

Not the answer you're looking for? Browse other questions tagged electromagnetism experimental-physics magnetic-fields inductance or ask your own question.