Acceleration of a body rolling down an inclined plane is given by:

How come acceleration is independent of coefficient of friction of plane when friction itself is causing the torque? I am not able to understand this although I am able to derive the formula on my own.

For this equation to be valid you also have to assume that the body rolls without slipping. In that case the friction is static and defined by the no-slipping constraint, but for this the coefficient of friction has to be bigger than a certain value.

The reason that the acceleration is independent of the friction for an object rolling down a plane (assuming no slipping) is because the friction in this system is static friction, and it does no work on a rolling object. Consider the following diagram: 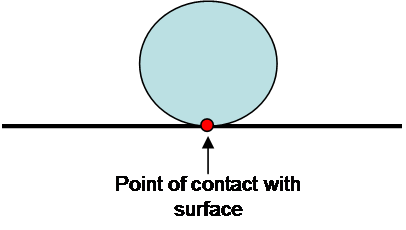 Now, lets consider the work done by a static frictional force. The work done on a system can be considered to be how much you change the energy of the system. Since static friction does not change the energy, the conversion of gravitational potential energy to rotational and translational kinetic energy remains the same regardless of the coefficient of friction, $\mu_s$. Therefore, the acceleration is not affected by it. So, how do we know it does no work. Consider the following definition for work.

where $F$ in this case is the force of friction, and $\Delta x$ is the distance over which the friction acts. Now, you might say that since the object is rolling, the frictional force acts over distance the object rolls, but this is not the case as we've established, because the point of contact with the surface for the rolling object does not actually move relative to the surface when it is in contact with the surface.

In general, try to consider the extreme situations in order to understand how and why an equation works (or not).

Not the answer you're looking for? Browse other questions tagged rotational-dynamics friction rotation rotational-kinematics moment-of-inertia or ask your own question.