We know that the electric field lines cannot intersect in this way: 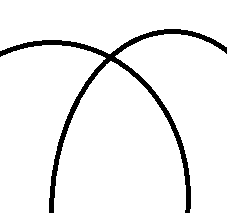 But what about this way?(where the two lines have the same slope at the point where they touch) :

Could the second situation ever occur? And why yes/no?

electrostatics electric-fields vector-fields
Share
Improve this question
edited May 11 at 6:54

There are two properties one can read from a display of electric field lines:

The former is tangent to the field line, or some kind of weighted average of the tangents to nearby field lines. This is the property usually invoked to show that they can not cross (can't point in two directions at once, see?). You've more or less defeated that argument.

But let's consider the second property: the local strength of the electric field is inversely proportional to the distance between the lines in this region of space. As your proposed lines swoop towards each other that distance goes to zero with the consequence that the strength of the field increases without bound. Another un-physical conclusion.

You can arrange a physical situation that approximates your drawing by getting very high field strengths in a pinch, but not one in which the drawing is exactly correct.

Although based on a correct physical intuition, the original accepted answer is not mathematically sound.

From the physical side, one could translate the mathematical properties into the fact that local unbounded variation of the electric field, in turn, would mean the large strength mentioned in the accepted answer. However, the reason is not directly connected to the relation between the density of field lines and the strength of the field. The real reason is in the way electric field can vary from point to point, as ruled by Maxwell equations.

Not the answer you're looking for? Browse other questions tagged electrostatics electric-fields vector-fields or ask your own question.