Should a superconductor act as a perfect mirror?

I have been told that metals are good reflectors because they are good conductors. Since an electric field in conductors cause the electrons to move until they cancel out the field, there really can't be electric fields in a conductor.

Since light is an EM wave, the wave cannot enter the conductor, and it's energy is conserved by being reflected (I'm guessing in a similar fashion to a mechanical wave being reflected when it reaches a medium it cannot travel through, like a wave on a rope tied to a wall for example).

I imagine then that more conductive materials are better reflectors of light. Wouldn't a perfect conductor then, such as a superconductor, be a perfect reflector of light? (Or reach some sort of reflective limit?)

Reflectivity at normal incidence is given by the equation. 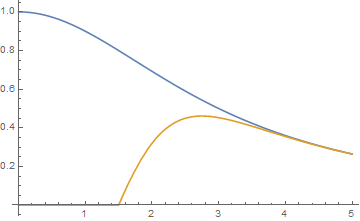 The area under the curve must be conserved, therefore the missing part of the area is hidden in a delta-function at zero frequency (we must take it into account to perform a Kramers-Kronig transformation properly). This is important, because the delta function in the conductivity (that's the manifestation of dissipationless dc current!) leads to a $-a/\omega^2$ term in the real part of the dielectric function. Large-by-magnitude values of the dielectric function give a good coefficient of reflection.

The other part of the dielectric function is $\mathrm{Re}(\varepsilon)$ and is obtained by doing a Kramers-Kronig transformation: 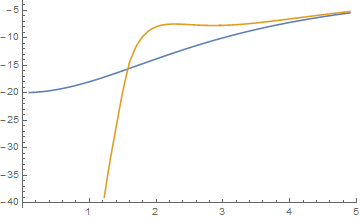 Now this can be plugged into the expression for reflectivity: 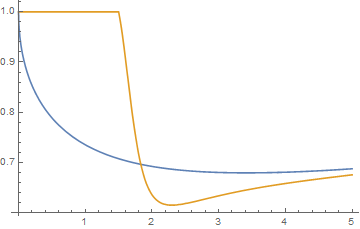 As you can see, and this is due to the vastly negative real part of the dielectric function, reflectivity below the gap is near 100%.

EDIT - actually, since the real part of $\varepsilon$ is negative, and within the superconducting gap the imaginary part is exactly zero (with caveats, such as s-wave vs. d-wave superconductors) $R$ would be exactly 100%.

The above explanation by LLlAMnYP holds fully in the limit case $T=0$, where the $R$ would indeed be exactly $1$ for $\hbar \omega<2\Delta(0)$. For $T>0$, unpaired thermally excited quasiparticles, whose density goes to zero as $T$ approaches $0$, absorb and dissipate energy even at frequencies $\hbar \omega<2\Delta(T)$. A more complete and rigorous treatment requires Mattis-Bardeen theory. Ref. Tinkham 3.9.3 (Fig. 3.10 in particular, case II ).

Not the answer you're looking for? Browse other questions tagged optics electromagnetic-radiation reflection superconductivity or ask your own question.

3
Can matter have 100% reflection?
0
Can a material have infinite or zero opacity?

2
How/Why does voltage reflect?
11
Why don't dielectric materials have coloured reflections like conductors?
0
Jitter in timing photons from corner-cube retroreflector arrays on the Moon; does each recorded pulse come from one single cube?
1
Standing waves in optical cavities
1
EM Wave Reflection and Transmission Between with Anti-Reflective Coating
2
Brewster's angle reflected wave- is it part of the refracted or incident ray?
6
Why do we get a reflected electromagnetic wave when it hits a perfect conductor?
0
Reflection at a conducting surface Boundary Conditions: Not sure if I am understanding this correctly or not